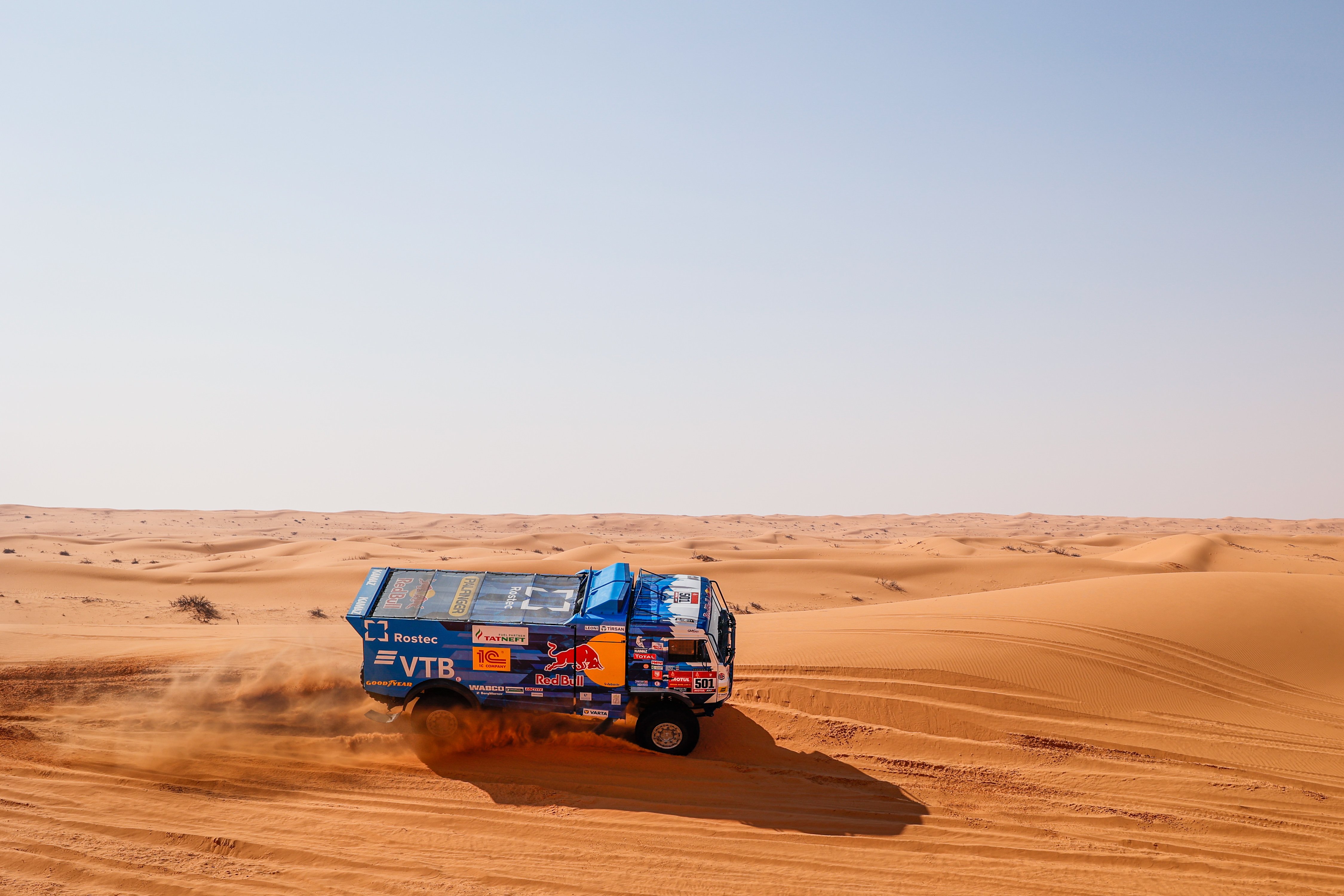 The sixth stage of the Dakar-2021 rally-marathon in Saudi Arabia along the Al Qaisumah-Ha’il route ended with a triple victory of the KAMAZ-master team. Ayrat Mardeev turned out to be the best in the truck competition at the finish - 4 hours 8 minutes 52 seconds. This is his first victory since 2018 at the Dakar stage, and now his total number of victories is five. His teammate Dmitry Sotnikov was only 1 minute 18 seconds behind him, Anton Shibalov was third, less than five minutes behind. For the Russian KAMAZ-master team, this triumph became the 150th at the Dakar.

The starting list for Friday was perfect for four crews on KAMAZ-43509. The leader of the Dakar-2021 Dmitry Sotnikov went to the mixed start at 12:10, and Anton Shibalov, second in the overall standings, at 12:14, two minutes behind Alexei Vishnevsky from the MAZ-SPORTavto team. Airat Mardeev, who is leading the fight for the podium, left at 12:20, Andrey Karginov - two minutes later. Thus, the last crew from Naberezhnye Chelny took on the role of a fast technician, not forgetting about their own high result.

At the sixth stage, the riders had to overcome dunes and sands, which made up 90% of the route. And the further the crews moved towards Ha’il, the higher were the sandy hills, reaching the third level of difficulty. For the KAMAZ-master team, these conditions are well known: the pilots know how to overcome dangerous and unpredictable dunes, navigators suggest the right course, and mechanics constantly monitor the vehicle's performance and select the required tire pressure.

The high level of the leaders of the truck category once again presented the fans with a beautiful fight for victory. On the first waypoint, Alexey Vishnevsky showed the best time, 20 seconds ahead of Dmitry Sotnikov. At the next mark, Sotnikov was already the first, while Vishnevsky was 44 seconds behind, and Anton Shibalov and Airat Mardeev wedged in between them, whose crew soon intercepted the baton.

The second half of the special stage took place in a more relaxed mode and ended with a Russian podium. Aleš Loprais (InstaForex Loprais Praga) and Alexei Vishnevsky were only 7 seconds apart in the fight for the fourth position. Andrey Karginov finished the day on the sixth line (+6 minutes 52 seconds). Martin Masik was marked by the seventh result (+12 minutes 30 seconds).

Thus, Ayrat Mardeev simultaneously pushed two opponents in the table and rose to third place. Dmitry Sotnikov strengthened his leadership in the overall standings of trucks; Anton Shibalov is on the second line. Andrey Karginov played one position - now he is ninth.

“There was a good special stage. From the very start, they began to attack, as there were dunes and Aleš Loprais was in front of us. They understood that he was the closest competitor in the overall standings. Together with him they caught up and bypassed Soltis, and then overtook Loprais. Then the task was to break away, but he grabbed me like a tick, did not let go and kept behind. On the sandy off-road, they added at the pace and broke away from it. We kept this pace until the finish line and when we learned about the victory, we were happy. I am glad that we were able to "bring" a lot of Masiku and climbed to third place. Ahead is a day of rest, God forbid, to continue to go steadily and keep the positions”, - said Ayrat Mardeev about the victory at the stage.