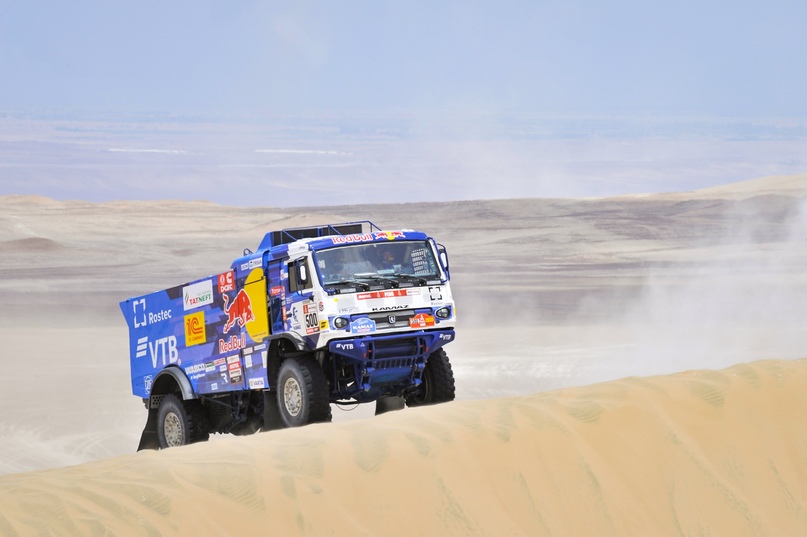 The forty first in succession «Dakar» has started on Sunday, January 6, in the capital of Peru. «KAMAZ-master» is a repeated prizewinner and fifteen-time champion of these prestigious races. Since 1990 when the Russian team announced itself for the first time on «Dakar» rivals have managed to lap it three times only. In the coming two weeks the Kamaz crew will defend the title of «Dakar» champions on four Russian new sports trucks. Just after the first two stages of the rally the crew of Eduard Nikolaev is the first in the final classification.

The eleventh South-American and the forty first in general succession rally-marathon will take place on the territory of one country – Peru. This is the main specific feature of the races this year. Endless Pacific beaches and high dunes have become the decisive factors to choose in favor of Peru. So, the start and finish at the same place and most of stages are looped but despite this none of the ten special sections will be repeated. The duration of the rally is 11 days: on January 17 the races will finish in Lima.

The total length of the route is 5600 km, almost 3000 kilometers of which are special sports sections. Thus, racers will be able to fully demonstrate their skills, technical excellence and serious training. «Dakar-2019» has become special in its entry list: 135 new participants take part in the rally. As the race organizers note the number of recruits has been growing every year: in 2017 there were 82 and in the last year – about a hundred already. 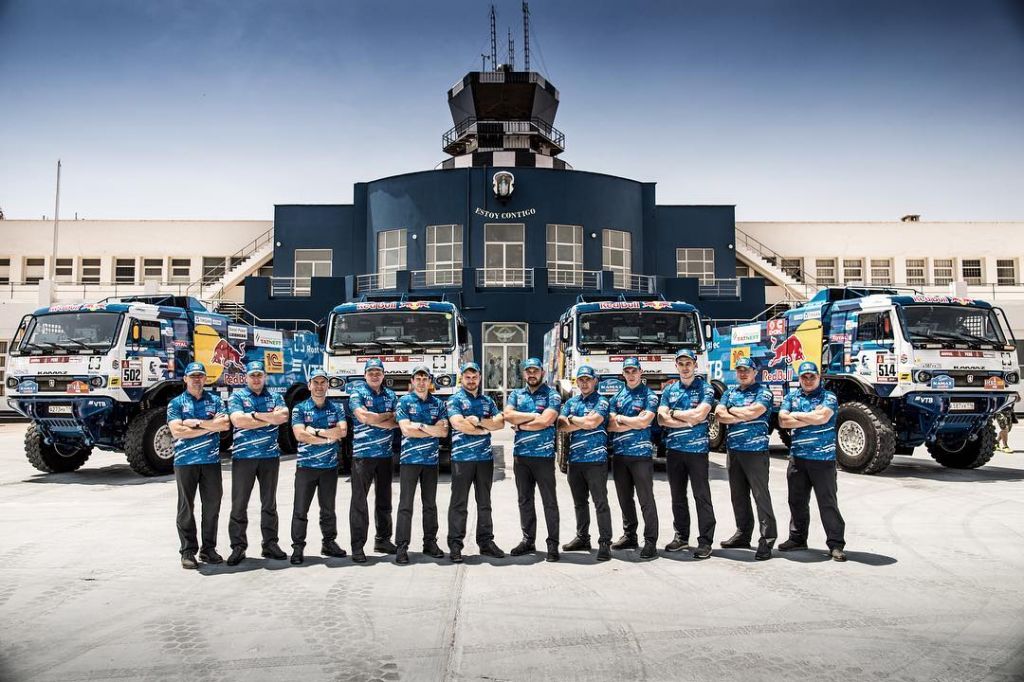 In total, 334 crews from 61 countries have come out to start in the capital of Peru in different nominations: 167 motorcycles and quads, 126 off-roaders and 41 trucks. Russian participants are presented in three categories and the greater number of ours is in the truck class where «KAMAZ-master» fielded four crews:

«Strong rivals are always intrigue and additional interest in the race, it adds thrill and motivation», – Eduard Nikolaev comments the strong entry list of truck ranking of «Dakar-2019». 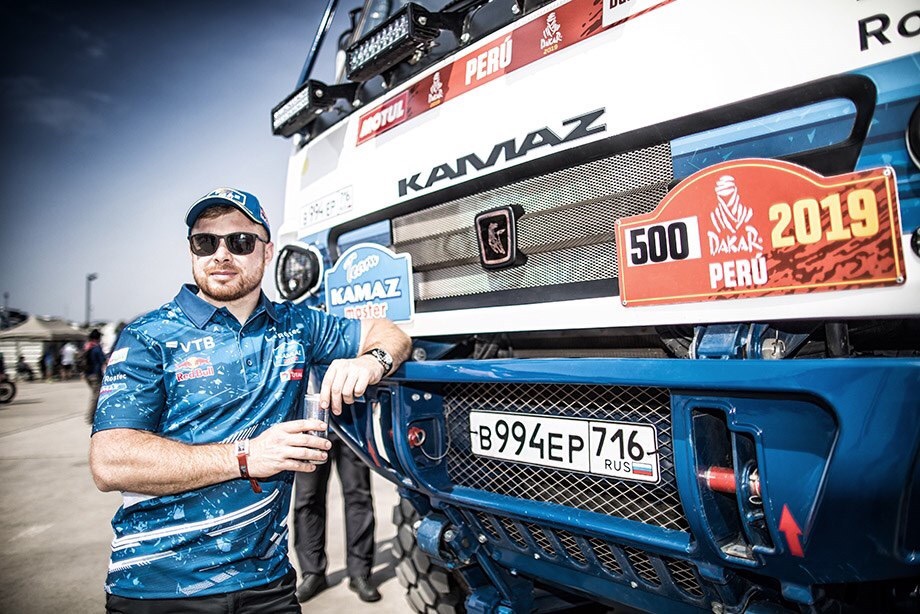 In addition to Gerard de Rooy a talented Argentinean driver Federico Villagra will claim to win from Iveco team. The legend of Argentinean moto racing nicknamed «Coyote» has become the winner of the national championship in a classical rally seven times. The last «Dakar» was remembered by the unparalleled fight Villagra – Nikolaev.  Just one second divided the arch rivals – Eduard Nikolaev («KAMAZ-master») and Federico Villagra (Iveco) in the general classification after 12 stages of races. At the penultimate stage San Juan-Cordoba the Argentine fell out of the race due to the gearbox failure.

This year Iveco has prepared for «Dakar» fundamentally:  reliable Ton van Genugten and experienced Maurik van den Heuvel will ensure support to de Rooy and Villagra. Automatic gearbox Allison will provide the great virtue in the sands to Iveco trucks. Moreover, gearboxes prepped at Fiat Powertrain division have a torque of 5500 Nm.

Crews of Renault team are among other strong rivals. As «The Silk Road-2018» showed bonneted truck Renault CBH 385 of the team leader Martin van den Brink is constantly being improved. To bring the weight to the minimum allowed at «Dakar» - 8500 kilogram - composite and lightweight materials are widely used in the car. For example, two petrol tanks of the car with a total volume of 850 liters are made from aluminum.

Traditionally strong roaster is at Czech teams Tatra Instaforex Loprais Team (team leader Ales Loprais), Tatra Buggyra Racing (team leader Martin Kolomy) and LIAZ Big Shock Team (team leader Martin Macik). Also, the Belarusian team «MAZ-SPORTavto» has announced its ambition to win in the races and participates at the rally with three crews of Siarhei Viazovich, Aleksandr Vasilevski and Aliaksei Vishneuski. Engines of two cars are prepped by Czechs from Buggyra Racing. In the car of Vasilevski  a 18-liter engine by Tutaev factory is still used. This engine is equipped with restrictors to limit the power – the devices that restrict air intake into the turbochargers. Let us recall that according to the competition regulations since January 2019 only trucks with engines the volume of which do not exceed 13 liters are allowed to participate at «Dakar».

Due to changes in the race regulations KAMAZ has prepared four absolutely new cars for «Dakar-2019». Externally they differ from the sports trucks of the previous generation in modern design as well new color. But in fact the team has developed the new car considering modern sports technologies and thirty years of experience in off-road rallies.

In-line six-cylinder engine Cummins ISZ-13 is used in the new truck which was released in May 2018 and got index КАМАZ-43509. Works on engine boost have been carried out since 2016 and performed in full by specialists of NP «КАМАZ-Avtosport» without involving foreign enterprises. 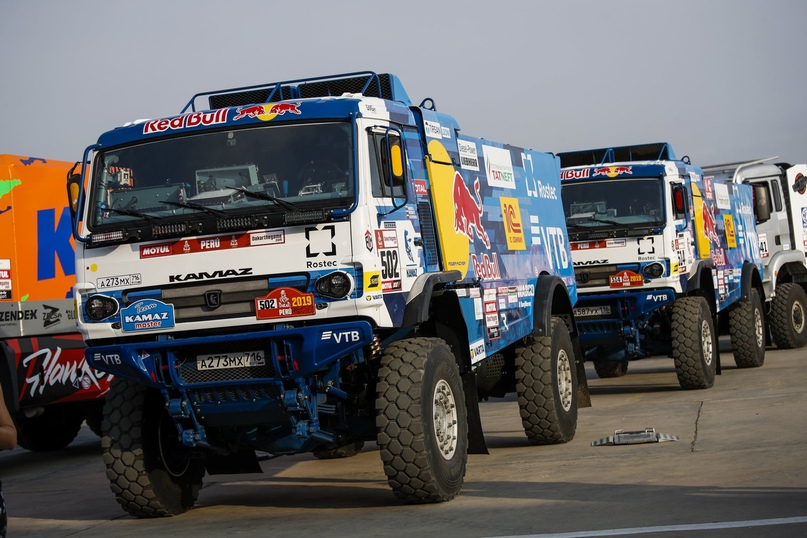 Press Service of the auto manufacturer states a great work has been done to maintain the engine performance at high altitudes. As a result power capacity of 1100 hp and 4500 Nm on torque has been achieved. And unlike the competitors using derated racing engines from ring trucks the specialists of «КАМАZ-master» team has used a purely serial engine and almost doubled its basic characteristics.

Besides, during the year a lot of work on optimization of suspension characteristics has been done. Also, full transition to 22.5-inch wheels has been implemented that provides high steerability, reliable ride at low pressure and better brake cooling. And this is an incomplete list of new technical solutions for the updated KAMAZ sports trucks.