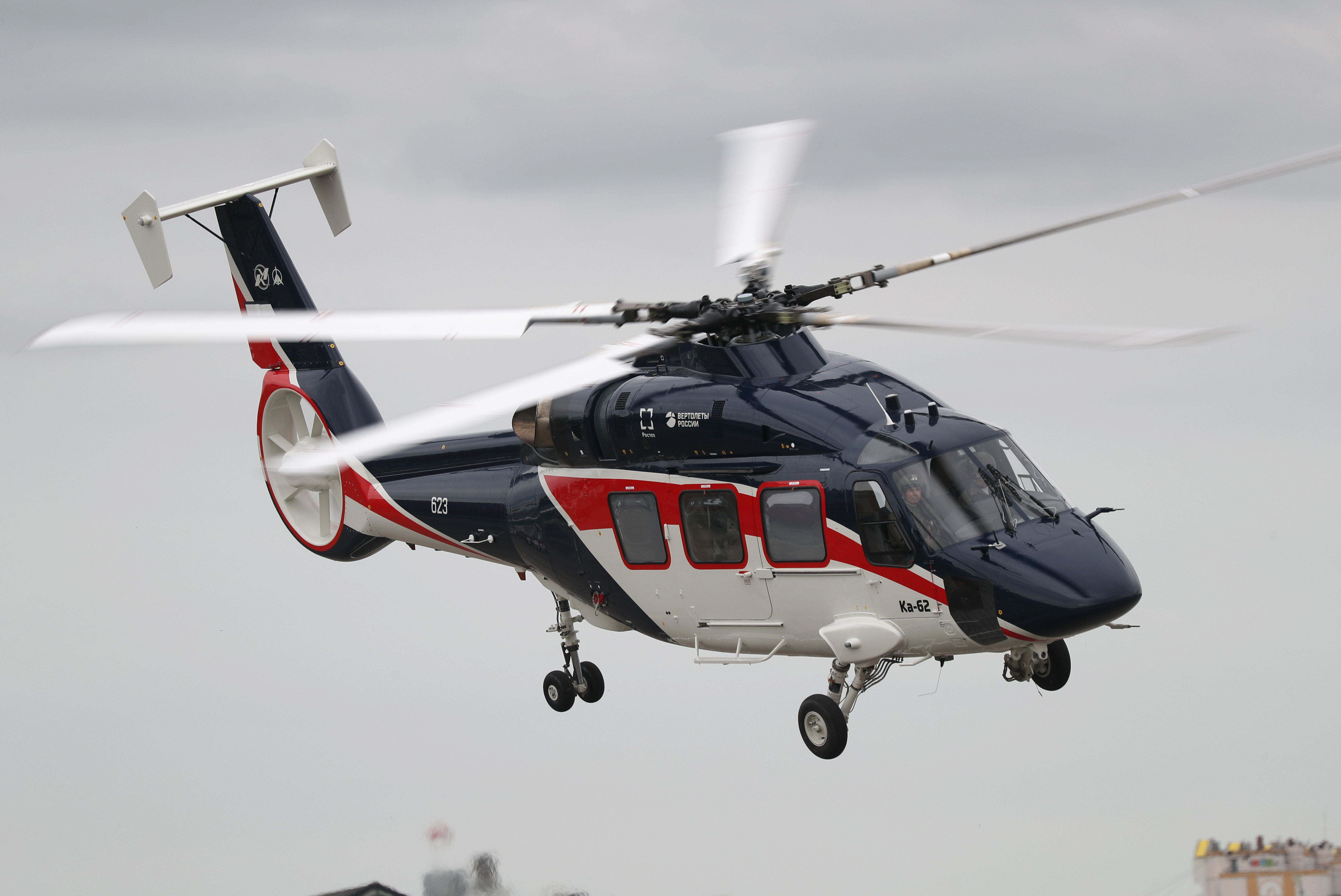 Russian Helicopters Holding Company (part of Rostec State Corporation) presented a prototype of its latest Ka-62 multi-purpose helicopter for the first time at the international aerospace show MAKS-2019. The machine is showcased at the static exposition and takes part in the flight program of the air show.

The Ka-62 will be involved in the fly-by of the entire line of the rotorcraft produced by Russian Helicopters Holding Company, and will also perform individually in the aerobatic program of the show.

"The Ka-62 project implements a number of fundamental innovations that had not previously been used in Russian helicopter engineering. In particular, it features a non-standard rotor design, and composite materials are widely used in its structure, which increases the maneuverability, flight speed, economic efficiency and load-lifting capacity of the rotorcraft. The helicopter will occupy the niche between the light-weight Ansat, Ka-226 and medium-sized helicopters of Mi-8 type. The multi-purpose nature of the machine, its outstanding technical characteristics, and adaptability to harsh weather conditions should make the helicopter of interest both for the Russian and the international markets," commented Anatoliy Serdyukov, Aviation Cluster Industrial Director of the Rostec State Corporation.

The machine is designed to perform a wide range of functions: cargo transportation, rescue missions and emergency medical care, observations and environmental monitoring, as well as to be used in the oil and gas industry and corporate transportation. The resistance of the helicopter to low and high temperatures makes it suitable for use in the Far North and Arctic regions, we well as in countries with a hot climate.

The helicopter is being prepared for mass production by Progress Aviation Company (Progress AAC) n.a. Nikolai Sazykin in Arsenyev. At the moment, the company has built three prototypes that are supposed to undergo a flight testing cycle.

"Participation in the flight program of one of the world's largest air shows is a great opportunity for us to demonstrate the flight qualities of this outstanding rotorcraft to potential customers and a big step forward in the Ka-62 project, which is getting closer to entering Russian and international markets day by day. We expect to receive a basic certificate for its cargo / passenger version in 2020," stated Andrey Boginsky, Director General of Russian Helicopters Holding Company.

The helicopter, which weights up to 6.5 tons, can transport 15 passengers over distances of up to 600 km, and carry cargo inside the cabin and on an external sling.

A specific feature of Ka-62 is the use in its structure of polymer composite materials, which account for up to 60% of its weight. This increases the speed, maneuverability and load capacity of the helicopter, and also reduces its fuel consumption. Another distinctive feature of the helicopter is its single-rotor design with a multi-blade anti-torque rotor ducted into the vertical tail fin, which was used on Russian helicopters in Russia for the first time.

Ka-62 has a large passenger cabin, which makes it possible to increase both its seat pitch,  and seat width. The helicopter's onboard radioelectronic equipment is entirely Russian-made, it features a cutting-edge steering unit to control general helicopter equipment of the next generation. The design of the helicopter is compliant with international safety requirements. In particular, the helicopter is able to fly and land with only one engine running. The injury protection of the pilot and passengers in the event of an emergency landing is increased due to the shock-absorbent design of its chassis and the seats.