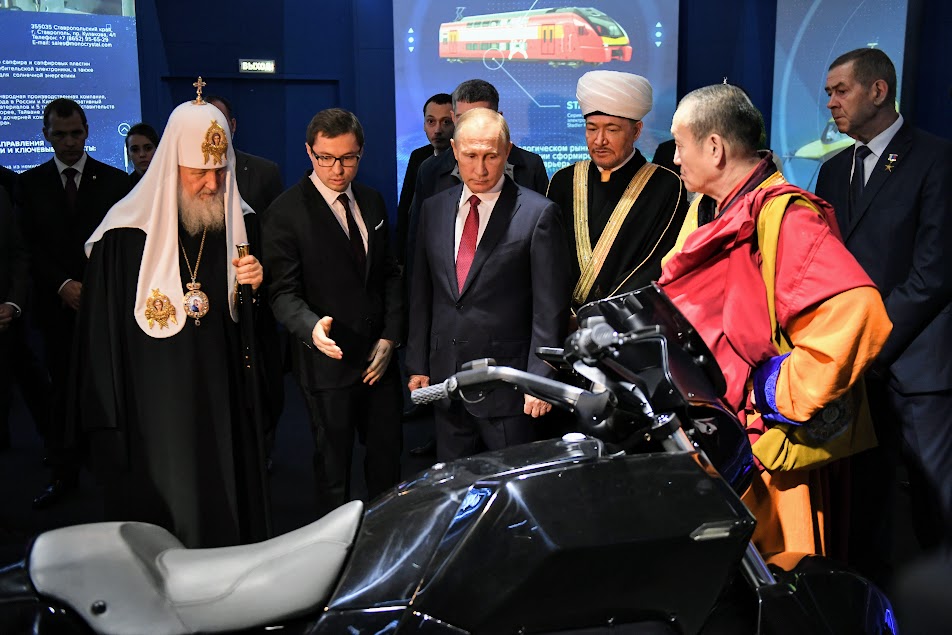 Today, on Unity Day, Vladimir Putin visited the Future-Oriented Russia exhibition being held from 4 to 22 November in the Central Exhibition Hall Manege, and examined the Industry room prepared by the Rostec State Corporation. Director for Special Commissions of the Rostec State Corporation Vasily Brovko presented conceptual solutions of industry of the future and advanced innovative developments to the Russian President, including heavy-duty motorcycle Izh manufactured by the Kalashnikov Concern and designed for the Cortege Project.

During the visit the President was accompanied by Patriarch Kirill of Moscow and All Russia, Chairman of the Russian Council of Muftis, Chairman of the Spiritual Administration of the Muslims of Russia Rawil Gaynetdin, Head of the Buddhist Traditional Sangha of Russia Damba Ayusheev and Mayor of Moscow Sergey Sobyanin.

Vasily Brovko was quoted by saying that the output of the first batch of motorcycles is scheduled for the first half of 2018. Weight of Izh is 500 kg and it is capable of travelling at a speed of up to 250 km/h, and accelerating to 100 km/h in only 3.5 seconds. Besides, the vehicle is equipped with a 110 kW gasoline opposed engine. As of today, the motorcycle of the Cortege Project is being tested.

The Cortege Project provides for creation of a model range of exclusive-class cars – limo, sedan, off-roader and mini-van. It has been being implemented since 2012 at the instruction of the Russian President. It is expected that the first batch of limos will be shipped in late 2017 – early 2018.