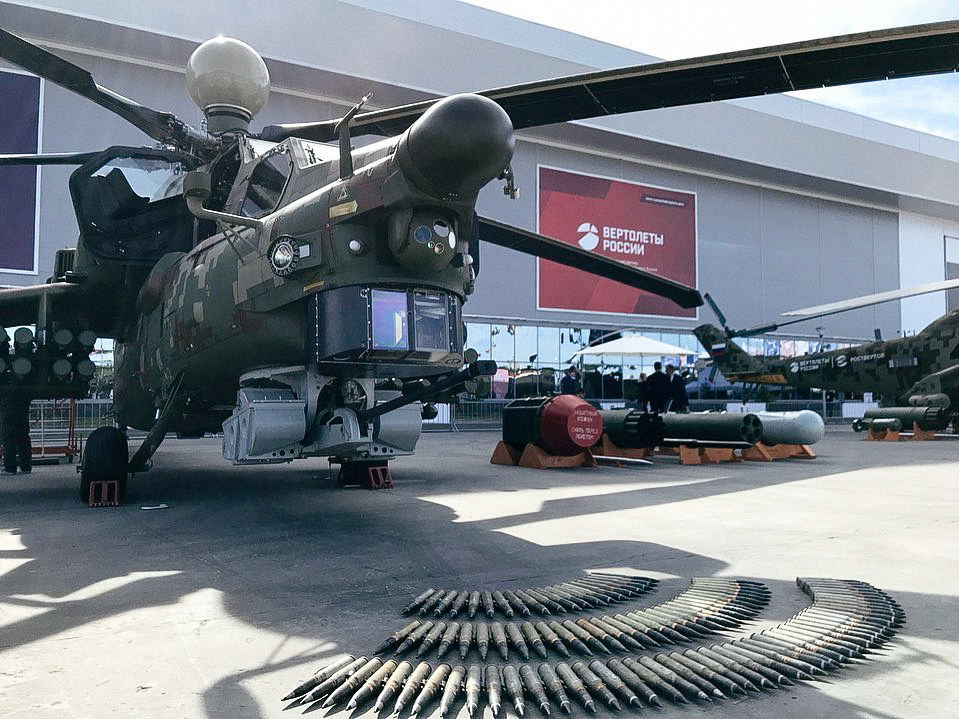 Rostec holding companies, such as the United Aircraft Corporation (UAC), Russian Helicopters, JSC Concern Radio-Electronic Technologies, Technodinamika, Shvabe, PJSC "OKTAVA", will showcase their military products at the forum. Visitors will have an opportunity to see the exhibits in the pavilions of the Patriot congress and exhibition center, in Rostec and UAC Democenters, on the static display at the Kubinka Aerodrome and during the air show.

The export version of the latest Su-57E fifth-generation fighter will be presented for the first time at the “ARMY 2020” static exposition.

Fifth-generation  aircraft system Su-57, accompanied with multi-functional light-weight fighter MiG-35 will take off the ground under the flight program. In addition the Ka-52 reconnaissance/attack helicopter and modernized ship-based helicopter Ka-27M will appear around the sky. Aerobatic team “Berkuts” will demonstrate (unsurpassed) abilities of attack helicopter - "Night Hunter" in the group and solo aerobatics.

Retrofit operating prototype model of military transport helicopter Mi-35P will be presented at the forum. Modified vehicle was equipped with advanced frontline target sight system, leading-edge flight simulator as well as retrofit sighting and computer system for automatic target tracking of the development objectives belonging to such holdings as Shvabe and UAC. The target sight system “OPS-24N-1L” implemented in the Mi-35P will be shown to the visitors at the stand of holding Shvabe and in the Rostec’s Democenter.

“Rostec unites air key manufacturers of aeronautic engineering products and components. That provides an opportunity to establish an optimal cooperation in the realm of development and production of the cutting-edge aviation equipment. At the “ARMY 2020” we present almost the entire line of combat helicopters, aircraft, the latest models of onboard electronics, power units and other aggregates. All the mentioned equipment is the result of close collaboration between a wide range of Rostec companies, " - said Anatoly Serdyukov, Industrial Director of Rostec’s Aviation Cluster.

Russian Helicopters Holding will present its know-how at the forum - the blade with saberlet, which allows to increase the maximum speed of Russian combat helicopters. Currently, the blades of this type (are being flight-tested)/ undergo production flight tests on the Mi-28N helicopter.

The United Aircraft Corporation (UAC) will demonstrate its multi-purpose virtual imaging sensor for the first time at the forum. This tool allows to significantly boost security of aircraft’s landing regime. All the incorporated functions create the opportunities to monitor the surrounding space with the help of visible and infrared sensors, to combine virtual image of ambient space with TV image, to receive corrections to the aircraft navigation data.

Leading manufacturer of parachute systems, holding Technodinamika, will showcase the special-purpose system “Stayer” for the first time. The system is intended for aircraft delivery from 700 to 8,000 m. Owning to the harness parachuters have an opportunity to attach a cargo container or other equipment in the front. The enterprise has developed laundry bags «Irbis» for parachuting and will demonstrate them for the first time at the forum. «Irbis» has 12 gauges for different types of parachuting.

The International Military-Technical Forum ARMY 2020 will take place on August 23–29 at the Patriot congress and exhibition center of the Russian armed forces, Alabino Military Training Ground and Kubinka Aerodrome.