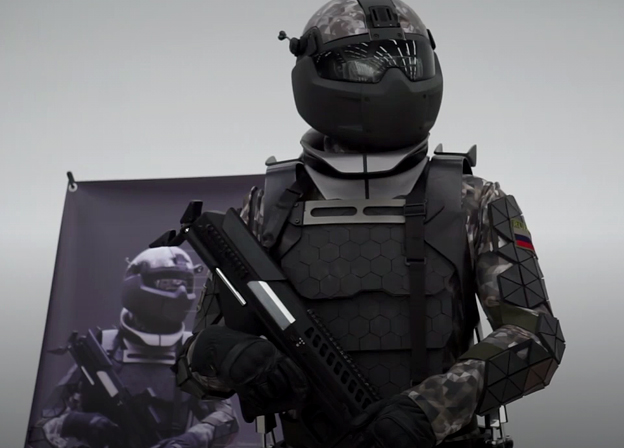 TSNIITOCHMASH (the Central Research Institute for Precision Machine Building, part of Rostec State Corporation) presented the exhibition called 10 Artifacts of the Future – Russian Promising Technologies at the Kinetika High Complexity Prototyping Center at the National University of Science and Technology MISiS. At the exhibition, TSNIITOCHMASH demonstrated promising combat suit  – a new high-accuracy sniper system in two calibers and several other designs – for the first time.

“A year ago, Rostec State Corporation started an industrial design development trend in Russia. Based on Rostec’s concept, TSNIITOCHMASH and the Kinetika Center have developed new generation combat suit for the soldiers of the future,” said Dmitry Semizorov, Director General of JSC TSNIITOCHMASH.

Innovative technologies that have not previously been used were tested for the production of the suit: calculation of the elements’ compatibility, development of camouflage patterns, etc.

The design of a personal combat suit was one of the first successful projects. In the future, TSNIITOCHMASH plans to continue working alongside the prototyping center to develop designs of portable weapons and other types of combat suit.

Rostec State Corporation is a Russian corporation that was established in 2007 to facilitate the development, production and export of high-tech industrial products designed for civilian and military applications. The Corporation comprises over 700 organizations that are currently part of 11 holding companies operating in the military-industrial complex and 3 holding companies working in civilian industry, as well as 80 directly managed organizations. Rostec's portfolio includes well-known brands such as AVTOVAZ, KAMAZ, Kalashnikov Concern, Russian Helicopters, VSMPO AVISMA, UralVagonZavod, etc. Rostec companies are located in 60 constituent entities of the Russian Federation and supply products to more than 70 countries. In 2016, the consolidated revenue of Rostec amounted to 1 trillion 266 billion rubles, while the consolidated net income and EBITDA amounted to 88 and 268 billion rubles respectively. In 2016, the average salary in the Corporation was 44,000 rubles. According to Rostec strategy, the main objective of the Corporation is to ensure that Russia has a technological advantage in highly competitive global markets. Rostec's key objectives include the introduction of a new techno-economic paradigm and the digitalization of the Russian economy.