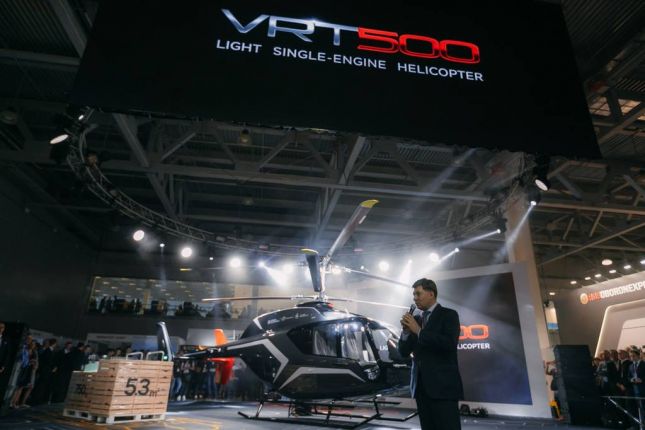 The HeliRussia fair became a place this year to unveil a light multipurpose VRT500 helicopter created by VR-Technologies design bureau belonging to Russian Helicopters. This is the first model of the holding company in the segment of vehicles with a takeoff mass of up to two tons. The developers are sure that VRT500 will be a breakthrough for Russia in the class of light helicopters capable of competing with popular foreign-made vehicles.

VRT500 is a light single-engine coaxial helicopter with a takeoff mass of 1600 kg. One of its main advantages is the most spatial in its class cargo-and-passenger cabin accommodating up to 5 persons, with a payload capacity of up to 750 kg.

VRT500 will be featuring a fully-integrated state of the art glass cockpit. The envisaged performance will allow the helicopter to fly at a speed of up to 230 km/h over a distance of up to 1000 km.

Some leading overseas companies are involved in developing the main helicopter systems taking into account Russian and international standards and safety regulations. For instance, VR-Technologies executives were quoted as saying that engines manufactured by Pratt & Whitney Canada and Safran Helicopter Engines were considered as plausible powerplants. It is worth reminding that the former company produces PW207 engines for Ansat helicopters, while the French company supplies Arrius engines for Ka-226T. 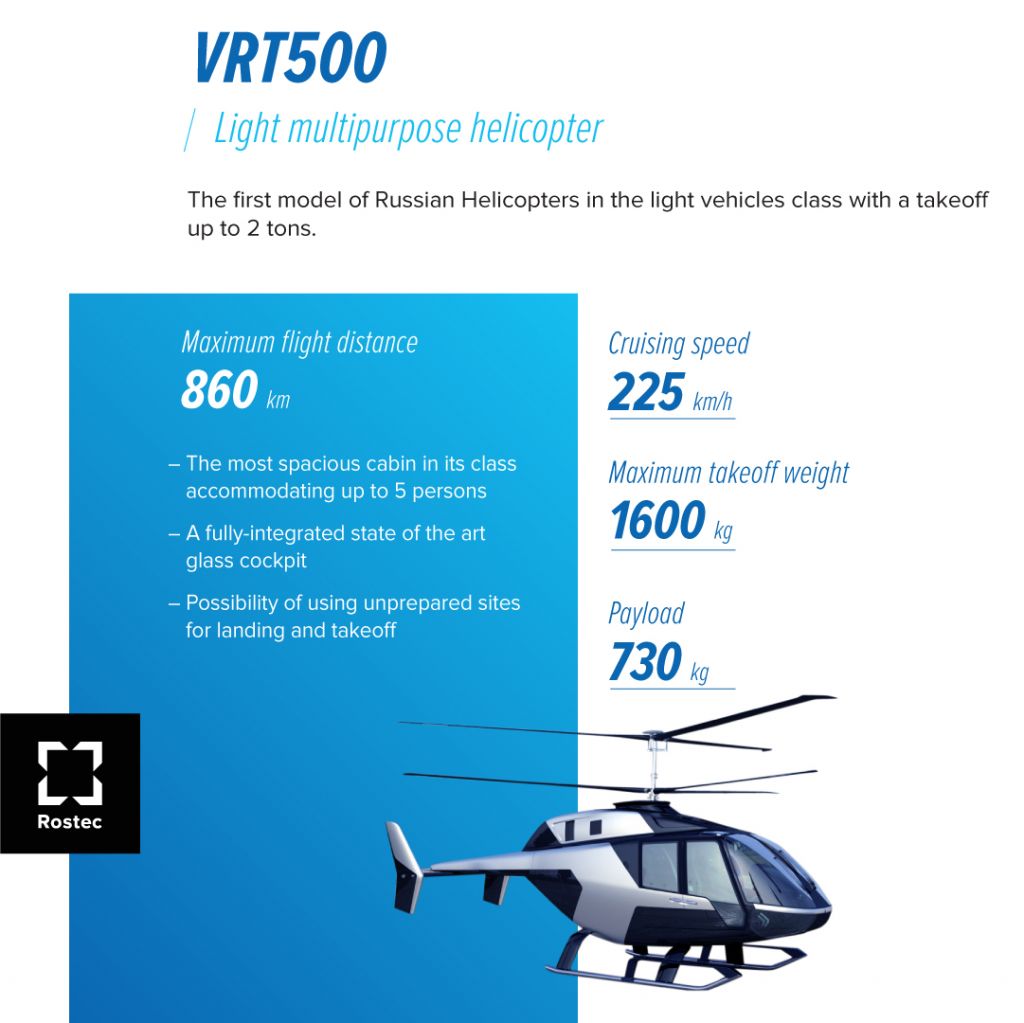 A powerful engine and modern avionics will expand the range of tasks performed by the helicopter.

The several VRT500modifications include those designed for passengers, multi-purpose, cargo, training, VIP and emergency situations. Besides, VRT500 will become the first world's emergency helicopter in the class of helicopters with a take-off mass of less than two tons capable of loading and unloading standard-dimensioned cots through the rear cockpit doors.

The multipurpose VRT500 helicopter has already successfully passed the first stage of aerodynamic tests at the Central Aerohydrodynamic Institute (TsAGI) facilities. It is expected that a prototype for trial flight tests will be produced by the end of 2019. Russian Helicopters expects completing the tests and certification of the chopper by the mid-2021.

VRT500 certification is also slated at EASA (European Aviation Safety Agency), upon which the helicopter will be ready to enter both the Russian and international markets. As noted by the developers, an excellent aircraft performance in combination with an attractive price should ensure the success of the machine abroad. The Holding has already noted interest in the project from both Russian and foreign customers. According to forecasts, about a thousand of such helicopters will be produced by 2035, thus allowing Russian Helicopters to take up to 15% in the global sector of light helicopters up to two tons.