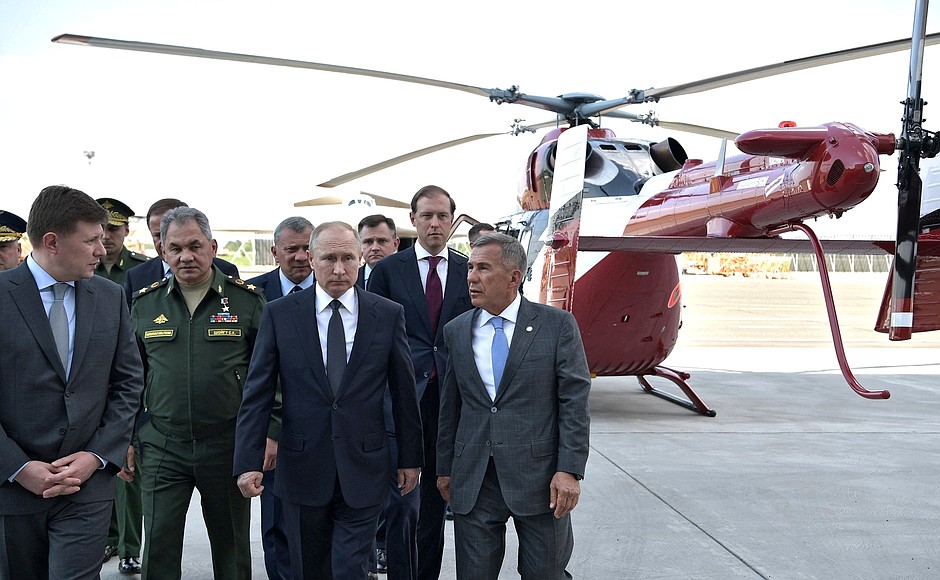 Photo by Press Service of the President of the Russian Federation

Vladimir Putin made a working trip to Tatarstan on May 13, during which he inspected the helicopters manufactured by the Kazan Helicopter Plant (KHP) of the Russian Helicopters holding company, Rostec State Corporation.

The head of state was presented with the Ansat, Mi-8MTV-5-1 and Mi-38T helicopters.

"Helicopters of Russia" presented the KHP products at the site of the Kazan aviation plant named after S.P. Gorbunov.

Andrei Boginsky, Director General of the holding, and Yury Pustovgarov, managing director of the KVZ in particular, demonstrated Vladimir Putin the first production model of the Mi-38T military transport helicopter.

The Russian President boarded the Mi-38T, intended for the airborne troops, inspected the aircraft and got acquainted with its characteristics.

“This helicopter was created on the basis of a new civilian Mi-38 aircraft and equipped with additional equipment for solving assault transport tasks.

This year we are transferring the first Mi-38T to the Ministry of Defense, as well as starting serial deliveries of the Mi-38 in the interests of civilian customers”, said Andrei Boginsky.

The Mi-38T transport assault helicopter occupies a niche between the medium Mi-8 and the heavy Mi-26 helicopters. It was created on the basis of a certified civilian Mi-38 helicopter with additional equipment for solving assault transport tasks. The helicopter provides for the possibility of its conversion into a sanitary version and the installation of additional fuel tanks to increase the flight range. The areas of application of the Mi-38 helicopters are transportation of goods and passengers, search and rescue operations in various climatic conditions, VIP transportation.