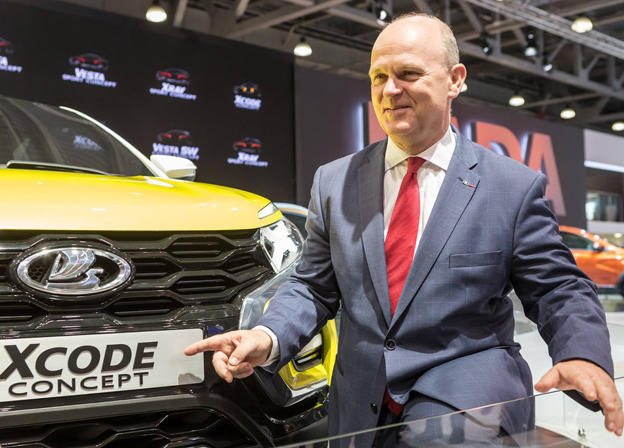 In an interview with RNS, AVTOVAZ President Nicolas Maure talks about LADA's new models that were on display at the Moscow International Automobile Salon (MIAS 2016), as well as his views on the company's future.

— When will shareholders determine the plan to recapitalize and financially assist AVTOVAZ?

— Shareholders are currently discussing this. They should be able to say more about this after the next meeting of the board of directors, which will take place on September 2. We are not talking about numbers and figures today. Renault, Rostec and Nissan are cooperating very well right now, and I hope they will find a good solution.

— What amount would be enough for you to bring the company out of recession?

— I won't comment on that. Currently we're able to run the company without adding this. Of course, we are making large interest payments (on loans) every month, and it is clear that the sooner we get the support the better.

— You previously said it won't be possible to bring the company back to profitability until 2018. Do you still think so?

— It is obvious that this depends on market conditions, which, in turn, depend on economic conditions in Russia itself. When I joined the company, we launched an action plan both for earnings and costs.

In terms of earnings, we're talking about market share, prices. Earnings also come from revitalizing and developing exports. The biggest contribution to earnings will come from auto sales to Kazakhstan in the second half of the year. As for costs, we have a medium-term plan to increase localization of Vesta and XRAY cars.

Based on the current prognostications about the Russian auto market, we see that we'll have changes around 2018. Previously I said that we will become profitable again not sooner than 2018, now I think that it will be no later than 2018.

— Does AVTOVAZ plan to change to composite materials in its cars production? Are you negotiating with suppliers?

— We have already introduced many types of plastic and carbon parts in our automobiles. We do not yet produce carbon body parts. But it is probably possible for the next generation of cars, like those on display today at the Salon. Renault has such technologies and if we want to use them, it will be possible to do so. But steel is also a good material and we are very happy to have quality steel suppliers in Russia.

— Many of international auto groups are actively working on developing and implementing unmanned automobiles. Is AVTOVAZ considering developing these technologies?

— First of all (and the Russian government supports it), let's talk about implementing GLONASS technology. There is work in progress with KAMAZ. Renault and Nissan are also working in this area. As for AVTOVAZ, we have a promising research program in this area with different phases, and we will gradually develop, implement and apply it using the advantages of new cars – such as the XCODE – to build this area brick by brick. But we should do this carefully, as there are issues regarding the safety of such cars and technologies. That's why this must all be presented to the consumer in the right manner.

At the Moscow Auto Salon, we are introducing some connection capabilities in our cars — technology for the cars to be controlled by means of devices and mobile phones: for example, engine start-up, turning the lights on, door locks, etc. These technologies already exist. The next step is Internet in the car.

— When might the XCODE model be put into production?

— Today we have demonstrated six concepts. Five of them may be brought to market soon enough, depending on the public's response. For example, XRAY Cross is a beautiful car. As for Vesta Cross, the decision has already been made that it will be available on the market late next year. XCODE is more long-term.

— Does the company plan to change to a more premium segment?

— We are exploring opportunities in the higher premium segment with the Vesta Exclusive model, which has pronounced luxury features that we did not have before. If we receive a good response from consumers, we will study this opportunity more seriously. But first we must create a positive and strong image of LADA in the B-segment. Right now, we are building the future with new cars and want to compete at the same level as global brands.

— Do you intend to review your dealer network? Are you ready to grant dealers special preferences or discounts?

— It is too early to talk about this. We have a new vice president of sales and marketing who started at the company on August 1. He came from Renault, but knows Russia very well. He will evaluate AVTOVAZ's dealer network. We believe that a number of dealers are already where they should be, others have to make progress in the quality of their service. But we do not plan any significant changes in the number of dealers or the number of sales points.

— Can we expect the price of your cars to rise this year?

— As of today, we do not plan any significant price increases. But of course it will depend on currency rates and competitors.