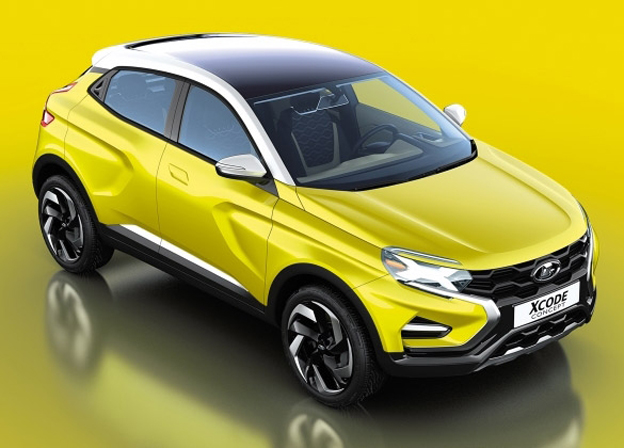 18th Moscow International Automobile Salon (MIAS-2016) was opened on August 24. AVTOVAZ presents 6 new versions of LADA Vesta. The LADA booth is the largest in the history of the brand. Its area is 2,000 sq. m. The total number of exhibits is 19, which is also more than ever before.

Potential development trends of the LADA lineup, new versions of the popular stock cars, as well as current stock and sports versions are presented at the exhibition.

LADA XCODE Concept is a car that shows a possible development trend of the LADA lineup and the new design concept based on X-style. The XCODE Concept is based on the DNK-design, which has been successfully implemented in the Vesta and XRAY stock cars.

The concept includes a number of advanced solutions, such as a turbine motor and a four-wheel drive transmission, as well as the Telematics Platform LADA Connect for operating the car systems by a smart phone and, in the future, using cloud services from the car. The sedan as a crossover utility vehicle is a concept design which is unique not only for the Russian, but for the world motor market in general. The growing demand for a cross-version, together with the traditional Russian adherence to a status sedan, can result in developing a really original car. The LADA Vesta Cross Concept Sedan is equipped with a special body kit, which protects the body enamel in cross-country riding. The concept includes larger ground clearance and larger wheels, thus increasing the off-road potential of the LADA Vesta sedan. The Cross Concept differs from its stock prototype, LADA XRAY, in the off-road body kit. These are kick plates, wheel flares, and bumper plates. Presently, the same body kit protecting the body enamel over off-road is used for the stock production of Kalina and Largus Cross versions. This is a conceptual estate-car body. Its first presentation was in 2015. This is an example of the progress of the LADA Vesta project and the interpretation of the new X-shape LADA style as an all-terrain estate-car. The dynamic outline of the estate-car is combined with increased ground clearance and advanced body kit made of unpainted plastic. Together with the stamped elements of the X-style on the sides, the off-road plates make the car look sportive, muscular and proportional. It is noteworthy that the conceptual estate-car uses taillights unified with the sedan. LADA Vesta Sport Concept shows rich potential of the sedan-bestseller. The concept body and compartment make the vehicle look like a racing-style car. The car is equipped with racing assemblies, making use of the experience of LADA teams' participation in world competitions, such as the WTCC Touring Car Championship. It is well known that, in June 2016, the LADA Sport Rosneft factory team won a double victory at the home stage in Russia. The concept car shows a possible development trend of the stock production line of LADA with uprated engines and a racing style. The LADA XRAY SPORT Concept engine is based on a stock 1.8-liter engine, which is now installed in LADA XRAY. Completion and realignment of the motor can increase its power from the rated 122 hp to 145–150 hp. The car suspension has been lowered and now has sports settings.

LADA Vesta Sport Concept and LADA XRAY Sport Concept were created as part of the single strategy of the LADA sport versions: currently, similarly modified Kalina Sport and Granta Sport are being manufactured.

This is a perspective version of LADA Vesta, which allows using two types of fuel: CNG (methane) and gasoline. Using CNG makes it possible to reduce fuel costs by more than 3 times. It is very important for corporate vehicles and taxis, that is why LADA Vesta CNG is made as a taxi version. Methane is more environmentally friendly and less explosive than propane and gasoline. In addition, using natural gas increases engine life. The elongated sedan is designed as a representative car. Its main feature is the additional 20 cm of space for the rear seats. Two comfortable seats divided with an armrest are installed instead of a backseat. LADA Vesta Signature is a customer car. At the request of the future owner, the car can be equipped with a high-performance multimedia system. The compartment finishing is customized.

This version is now ready for manufacturing. Its characteristic feature is the new power unit (a similar one is installed in LADA XRAY). The capacity of the LADA 1.8-liter engine is 122 hp. It features valve timing and lift electronic control (VVT). The car has manual and automated manual (AMT) transmissions, developed jointly by LADA and the German company ZF. АМТ is calibrated to adapt to the individual driving style.

The new Exclusive version has optional features, such as leather upholstery of the seats and the steering, interior lights at the feet of the passenger and the driver, chrome moldings on the doors, etc.

The stock lineup is presented by models of Vesta and XRAY, as well as the Kalina and Largus cars. You can see these cars at the LADA booth and test them at the site near the exhibition pavilion. It is worth noting that some of the cars are made in perspective versions. For example, the company is presenting LADA Vesta with the standard transmission and a 1.8-liter engine, while the XRAY crossover is equipped with cruise control and ESC off function.

Also demonstrated at MIAS is the sports lineup of LADA — Vesta sedan, which is taking part in the World Touring Championship (WTCC), and low-volume Kalina Sport, Granta Sport and Kalina NFR. The LADA 4x4 family is represented by two low-volume versions: swamp buggy "March" and the five-door LADA 4x4 Urban, which went on sale this year.

MIAS-2016 is being held at Crocus Expo IEC till September 4 . The AVTOVAZ booth is located in Hall No. 14.