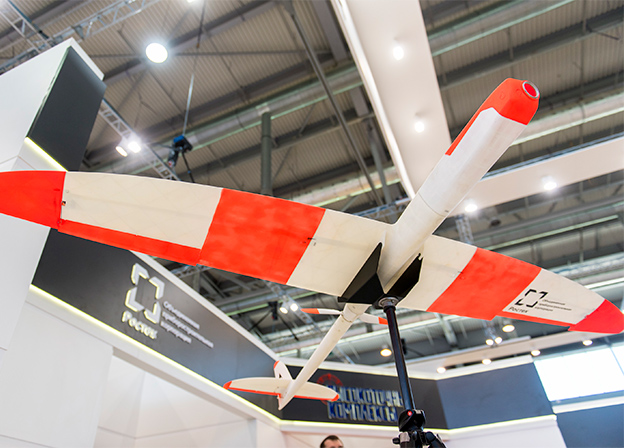 In Innoprom-2016, United Instrument Manufacturing Corporation (UIMC) showed the first unmanned air vehicle in Russia completely manufactured by 3D printing technology. Such drone manufacture takes approximately one day and its components are assembled before its launch like an erector set in 15–20 minutes.

The new drone is capable to carry video equipment aboard and perform different tasks related to territory reconnaissance and monitoring. The set of the airframe load-bearing elements (fuselage, wings, and tail assembly) is built as an integrated whole with the apparatus skinning, which permitted to decrease its weight, give it the required structural stiffness as well as provide high-level aerodynamic characteristics.

"The use of additive technologies permits to significantly expedite and cheapen the process of the new product creation and its serial manufacture. The advantage of this air vehicle is that each of its components can be manufactured on-the-fly even in field environment, – comments Sergey Skokov, Deputy Director General of UIMC. – The drone designed by our Engineering Division Luch, has passed successfully the full-scale development flight program trials, proving the effectiveness of the use of the 3D printing technology in this area”.

According to him, the concept of group use of drones can be implemented for solving various combat tasks without bothering about risks of the machines damage and loss.

The drone is able to perform its tasks within a range of up to 50 km. It is equipped with a domestically manufactured engine, its weight does not exceed 4 kg, and its wing span is 2.4 m.

"One particular feature of this drone is its propeller location. It is usually located at the nose or tail part of the airplane. In this case, the propeller is located in the center of the apparatus, is secured on its beam itself and turns around it. Such a solution gives advantages from aerodynamics point of view," – Sergey Skokov says.

Innoprom-2016 international industrial fair is to be held from July, 11-th to 14-th in Ekaterinburg. Every year, the event brings together more than 50 thousand participants, over 600 Russian and foreign industrial companies.

United Instrument Manufacturing Corporation is a holding company incorporated with Rostec. It unites over 60 enterprises and scientific research organizations of the radioelectronic industry with a total number of employees over 40 thousands  Its main specialization is design and manufacture of communication systems, control systems and radioelectronic warfare for Armed Forces of Russia as well as robotic equipment, unmanned aircrafts, medical, telecommunication and computer equipment. The products of the corporation have been delivered in more than 30 countries worldwide, including countries of Africa, Asia, Latin America and Middle East. In 2015, the corporation took the 24-th place among the 100 largest weapons manufacturers worldwide. The total annual revenue of the holding company is over RUB 100 billion.