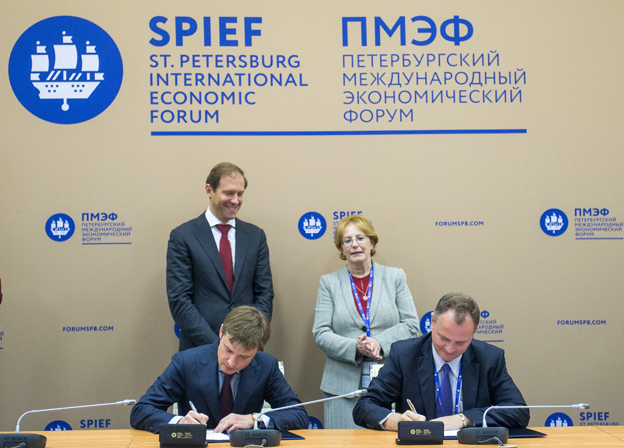 The National Immunobiological Company (Nacimbio) of the Russian Technologies State Corporation (Rostec) within the framework of the St. Petersburg International Economic Forum (SPIEF) 2016 jointly with the Indian company Cipla signed the agreement on technology transfer for active pharmaceutical ingredients (API) manufacturing as well as the production of the finished pharmaceutical forms of co-formulated drugs for HIV and viral  hepatitis treatment. Moreover, another agreement on joint elaboration and manufacturing of innovative ARV-drugs was signed with the Russian company ChemRar. The range of medicinal products planned for manufacturing fully complies with therapeutic regimens and WHO guidelines on ARV therapy.

“The implementation of these two projects will allow to fully meet the demand for such medicinal products by 2019 by the aid of domestic manufacturers, as well as to achieve a twofold decrease in the cost of the course of treatment for Russian patients. The first commercially available medicinal products will appear as early as in 2017, and it is planned to achieve full-scale commercial production by 2018. Total investment into the projects will amount to approximately 4 billion rubles”, said Sergey Chemezov, the CEO of the Rostec State Corporation.

Nikolay Semenov, the CEO of Nacimbio, and Chawla Chandru Jaswant, the Head for the Corporate Strategy and New Ventures of the pharmaceutical company Cipla, signed the document.

“Today the patients undergoing anti-HIV treatment in Russia have to take handfuls of ARV-drugs – from six to eight pills at once. Our projects aim at manufacturing of co-formulated medicines, which can reduce treatment to 2-3 pills per day and significantly improve patents’ compliance. Moreover, we will reduce the cost of treatment of HIV-positive patients from current $1,170 to $650 in a short perspective”, stated Nikolay Semenov.

In his opinion, this will double the therapy coverage with the same financing.

“According to the performed analysis, we see that only in case of a full cycle of production we can set the most competitive price.  This measure will provide 80-90% ARV therapy coverage”, added the CEO of Nacimbio.

Within the frames of the signed agreement, construction and validation of the manufacturing plant will be finalized in 2017; its products will be commercially available in 2018.  The volume of investments into the joint project with Cipla will exceed 3.3 billion rubles.

“We are really proud of our partnership with Cipla, a global leader in HIV/AIDS and hepatitis drugs production”, said Nikolay Semenov. “Most of the company’s products have passed the WHO qualification and are shipped to more than 100 countries all over the world, including the supplies within the frames of the international health support programs. Moreover, Cipla’s production sites are certified in the US, EU, Austria, Japan, and Great Britain, while its medicinal products are available also on the European and North American markets”.

“In Russia, we currently do not have the know-how of producing anti-HIV drugs in the context of a full cycle of production, and we understand the responsibility placed on us as a partner”, acknowledged Chawla Chandru Jaswant. “We are glad that together with Nacimbio we will be able to improve the drug supply for the patients and thus to make our contribution to the fight against this dreadful disease”.

Another document signed in the course of the Forum was the agreement with ChemRar which constitutes a part of Nacimbio strategy. The document was signed between Nikolay Semenov, the CEO of Nacimbio, and Andrey Ivaschenko, the Chairman of ChemRar Board of Directors. As a result of Nacimbio and ChemRar’s cooperation a joint venture will be created that will provide for all stages of product's life cycle: from research and development to production and sales. As early as in 2017 the medicinal products will be manufactured in the context of a full cycle of production. The volume of investments into the joint project with ChemRar will amount to more than 1 billion rubles.

“We have been monitoring the dynamic development of this innovative company for a long time and it is perfectly clear now  that it has plunged into the constellation of Russian manufacturers that stand a footstep away from commercial launching of not only generic drugs, but also products with a potential of truly global blockbusters. It is hard to overestimate the uniqueness of such developments for our company, since we set ourselves a task not only to phase-out imports and decrease the prices of medicinal products, but also a task of launching domestic innovative products to the Russian market”, commented Nikolay Semenov.

“It is of prime importance that for the first time innovative ARV-drugs developed by Russian scientists and produced exclusively in the Russian Federation will be launched to the Russian market. These drugs are long-awaited by our patients and we will apply all our efforts to launch production on time and with the expected production volumes”, said Andrey Ivaschenko.

Moreover, one more agreement was signed on the margins of the Forum with an Indian investment company Ishvan Ltd. interested in the development of production of medicinal products on the territory of Russia.

The National Immunobiological Company was established as part of the Rostec State Corporation in 2013 as the organization managing the holding company formation in the immunobiological products development and production. The holding company is designed to ensure the independence of the Russian Federation from imported medicinal drugs (in particular, immunobiological drugs and drugs against infectious diseases) through the development of its own production and scientific expertise. The company carries out its development in such segments of the pharmaceutical market as vaccines under the National Immunization Program Schedule; anti-TB drugs; blood-derived products; and medicinal products to treat HIV and hepatitis. Besides, it is planned to develop the sector of medical devices. Such production companies as the Scientific and Production Association Microgen, FORT LLC, Syntez OJSC, and the Moscow Production Association Metallist will form part of the holding company.

Cipla is a global pharmaceutical company focusing on provision of patients with high-quality products at affordable prices. The company's mission lies in its desire to reinforce its position on the pharmaceutical market and to use innovative technologies to meet the everyday needs of patients. Over its 80-year history, the company has become one of the leaders on the pharmaceutical market in more than 100 countries. The company’s portfolio includes over 1,000 high-quality medicinal products. The company offers the biggest in the world range of HIV-treatment drugs approved by the WHO and the US FDA. Cipla produces 16 ARV-drugs for the first, second, and third lines, as well as more than 40 various combinations:  fixed dose combinations of 2 or 3 APIs and other combination products including liquid dosage forms. Currently, the world's share of Cipla's commercially available anti-AIDS products achieves 70 – 80%.

Center of High Technologies ChemRar is a Russian non-state innovative business incubation of hi-tech companies operating in the area of living systems. The key mission of the ChemRar group of companies lies in the development and launching of innovator drugs based on the latest “post-genome” technologies to treat oncological and infectious diseases, as well as the central nervous system diseases. The modern production facilities of CHT ChemRar provide for the full cycle of pre-clinical and clinical development of new medicinal products and compounds from the identification of the relevant biotargets for highly-efficient screening, synthesis and tests of new molecules and dosage forms to the launching of new medicinal products.