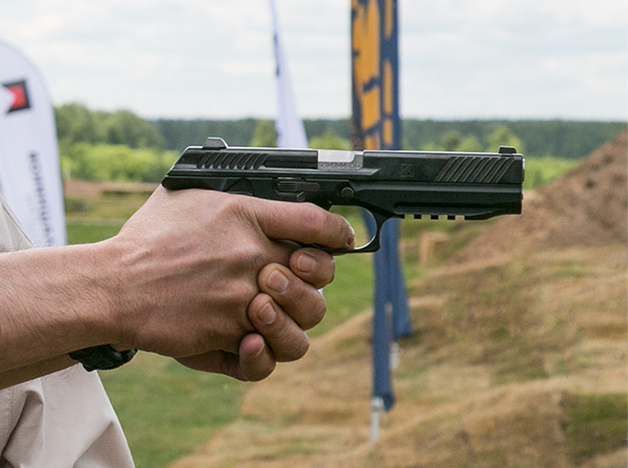 The testing of the Lebedev pistol (PL-14), commissioned by the RF Ministry of Defense, will be completed this year, announced Aleksey Krivoruchko, CEO of Kalashnikov Concern.

"We are now working within the framework of the technical specifications in the interest of the Ministry of Defense, and our plans are to finish it this year. We hope that it will be in production next year," said Alexey Krivoruchko on the air at the "Echo of Moscow" radio station. He also noted that the MVD may become a new customer of the pistol as well.

As previously reported, the new pistol, which uses a 9х19 mm round, stands out by its low thickness – from 21 mm at the front and up to 28 mm in the grip area. The bilateral location and configuration of the controls of the PL-14 allow it to be used both by right-handed and left-handed users and make it comfortable to wear, draw, and fire.

Particular attention is drawn to the safety of weapons: the trigger/firing mechanism prevents the loaded pistol from misfiring even after falling from a great height onto a hard surface. In addition, the base version's trigger is intentionally made longer and requires more pulling effort than usual. This will prevent a shooter from accidentally firing a shot in a stressful situation when holding a finger on the trigger.

The enhanced handling safety of the pistol is also ensured by a highly efficient round-in-the-chamber indicator, which allows an operator to quickly and unmistakably identify "by touch" if the weapon is loaded.

The versatility of the pistol will enable its use not only as a combat weapon for the army and police, but also as a match pistol for competitions in various categories. As previously reported, Kalashnikov Concern intends to introduce modifications that will allow it to be used in sports events, as well as to release different variants that feature alterations to the characteristics of the trigger/firing mechanism.

Main characteristics of the pistol:

Alexey Krivoruchko: We Have Not Lost Access to US Markets