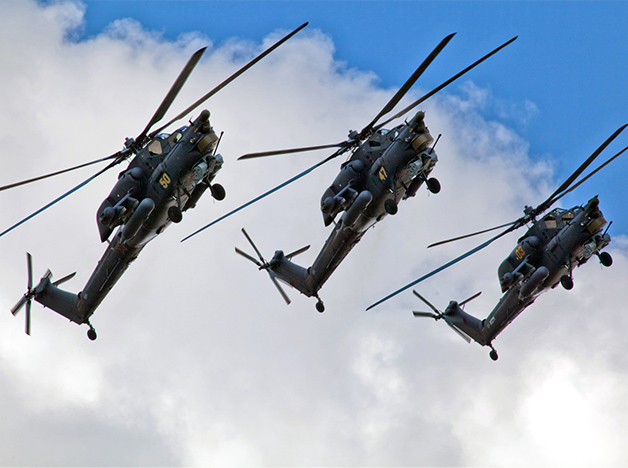 The Holding's press release highlights the fact that the unstable international situation necessitates continuous upgrading of the helicopters and equipping them with the latest protection systems in order to enable safe flight in potentially dangerous areas.

"Helicopters made in Russia have always shown great results in real combat situations. Russian Helicopters is working to improve its aircraft by continuously upgrading and equipping them with next-generation onboard systems. The new President-S will protect helicopters against hostile MANPADs and ensure high flight safety," commented Alexander Mikheev, the Director General of Russian Helicopters.

Currently, Mil Moscow Helicopter Plant is carrying out successful tests of a Mi-171Sh helicopter owned by a foreign country. The aircraft has an integrated onboard President-S system. Upon a successful completion of the tests, the specialists of Russian Helicopters and Concern Radio-Electronic Technologies will upgrade a large fleet of Mi-171Sh helicopters directly at the base of the foreign customer.

The President-S modern high-efficiency on-board defense system will be installed not only on new helicopters under supply contracts, but will also become an essential component of the upgrade program for helicopters operated by foreign customers in a joint effort with Concern Radio-Electronic Technologies.

President-S includes a laser illumination detector, ultraviolet missile approach warning system, electro-optical electronic warfare system, decoy flares, and control system. The design of the President-S system includes a number of units (stations), which can be placed both within the helicopter airframe and on external attachment fittings.

President-S demonstrated its high effectiveness in the recent tests. During a MANPAD attack, none of the missiles hit the helicopters protected by the new on-board defense system.