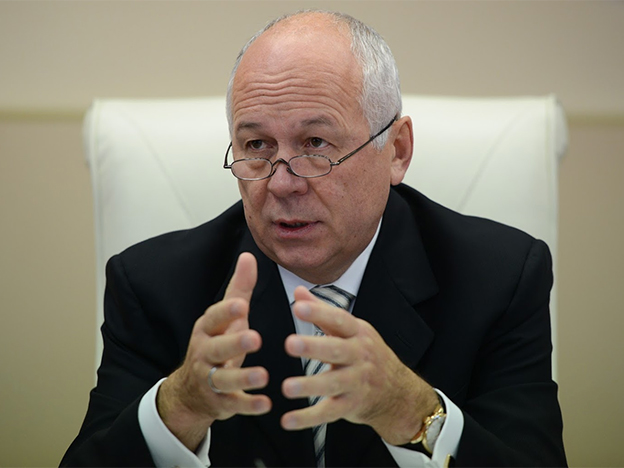 Sergei Chemezov is one of the most powerful people in Russia’s defense industry. Rostec, the state industrial holding he runs, is a giant in the Russian arms sector, controlling companies that produce Russian small arms, helicopters, radar systems and a wide range of other weapons.

WSJ: Can you give us a picture of how the economic situation and fall in oil prices have affected Rostec’s business and the Russian defense sector in general?

It’s no secret that our entire economy in Russia directly depends on prices for oil and gas. Our industry is no exception. To a certain degree, we are dependent. That dependency becomes less and less with each year, seeing as our businesses are growing.

In the past 10 years, our businesses have begun growing widely and producing a wide variety of possible products that give us the possibility to sell not only to the internal market but also sell abroad for export. We receive foreign currency from that, and now that the exchange rate is quite high, it’s advantageous for us.

If we are talking about the defense sector, our businesses aren’t experiencing particularly big economic pressures from the financial market, because there’s an opportunity to export abroad, and thanks to that, we are making a pretty good profit, and plus domestically, our defense orders also aren’t small.

We have seen the statements by the Russian Ministry of Finance saying Russia cannot afford such defense expenditures. Do you agree?

Of course. The budget is reducing, because revenues are smaller and smaller. The price of oil and gas isn’t as high as desired, and the main source of revenue from the budget comes from that. So of course there is a reduction in government defense orders, it’s completely understandable. But it’s not to the point of being critical for our industry.

Do you think it will actually be a 5% reduction this year?

There will be a reduction. There already is one.

Will it be by more than 5% this year?

I think government defense orders will be reduced by about 10%.

There was a decision by the president and prime minister that what has already been started should be carried out to the end. You can’t quit when you’re halfway there. Money has already been invested, and if we stop without finishing, then that will be lost money. Everything that has been started will be finished, and money will be allocated to it. We probably won’t be releasing anything new for now. That will probably be put on hold.

What about the Armata tank?

No, that’s already in serial production. There are things that are in the development and testing stages, things that we’re only just starting, we’ll stop.

How will Rostec adapt as defense orders taper?

We understand that [government] defense orders won’t be forever. Our rearmament program is designed to go until 2020. It will end, and then these order volumes won’t be there. The army will still need replacements for older things and will buy new things, but it won’t be these volumes. So we set a goal for the heads of all our businesses to increase the percent of civilian products they make to 50% by 2025.

Yes, it’s complicated, of course, but it’s still happening. Already today, we are at 28% civilian products. Before, we had practically none, we had only military production. Our businesses are making medical equipment, and quite good medical equipment. For example, our company Shvabe makes incubators for neonatal centers.

Rostec is planning on selling minority stakes in its businesses to private investors. Which businesses are you planning to sell shares in?

For defense businesses, we received the right to sell up to 49% of the shares of the company to private investors, including possibly to foreign investors.

With regard to Russian Helicopters, for example, we are holding discussions with Mubadala Development Co. in the United Arab Emirates. They are looking seriously at the possibility of buying a share, not 49% but maybe 20% or 25%.

What other of your businesses are you looking at to sell a stake?

We are already ready on Russian Helicopters and Concern Radio-Electronic Technologies, known as KRET. So far, it’s these two, and [small-arms manufacturer] Kalashnikov is already done.

It’s probably not possible for KRET to have foreign investors, no?

Right, probably not. With KRET, there probably won’t be foreigners, but with Russian Helicopters, yes. For KRET, already a sufficient number of our own Russian investors have turned up.

Do you already have any negotiations regarding KRET?

Would you like to sell the stake by the end of the year?

We would like to do it by the end of the year, if we can do so in time.

Rostec had a delegation in Iran in December. We read that there could be an $8 billion deal between Russia and Iran for weaponry.

Russia is giving credit to Iran, and using that credit, our business Technopromexport will build a thermoelectric power plant in Iran. Other energy companies are receiving part of the funding for the construction of grids.

When it comes to weaponry, they buy that with their own money, not with ours.

They need submarines and antiaircraft weapons?

Will they get any of it?

Maybe it’ll work out. First, they have to find money for all of this, because the credit we gave out was not for weapons but for various civilian projects.

When will Iran received the S-300 [air-defense system]?

I think we will deliver the S-300 by the end of the year.

But the S-300 PMU-1 that you agreed to sell Iran isn’t produced anymore, correct?

Essentially, it’s the last system that we will deliver, and then yes, after that it probably won’t be produced anymore.

So it will definitely be a PMU-1?

Why is it taking so long to deliver?

You see, there are still court deliberations going on in Geneva. We agreed, they promised that they would drop their claim once we make the first delivery. The first delivery will be in September or August.

We’ve all written about this so much, it’s hard to believe it’ll actually happen.

You also recently signed a deal with China to deliver 24 Su-35 fighter jets?

We have signed, but it hasn’t come into effect. There’s a procedure on ratification. To sign is not enough, it has to be ratified by our side and the Chinese side.

When will that happen?

So when will the first delivery take place?

The campaign in Syria is probably the clearest demonstration of Russian military might since the Soviet era. How much is deployment in Syria influencing your designs, strategy and plans? For example, maybe you see how the Armata tank is performing there?

There’s no Armata there. Firstly, we have practically no land warfare equipment there, very little. It’s mostly small arms, antitank weapons. What’s being used there is mostly aviation, but aviation is all Ministry of Defense.

We indeed are using it as a testing ground. It’s no secret. We look at how everything is working, whether it’s good or bad, we make corrections or modifications. They’re fighting there with weapons produced in the 1980s and the 1990s. There isn’t modern weaponry there.

How are sanctions affecting Rostec’s businesses?

Of course, to a certain degree, sanctions are affecting them negatively. We have been forced to start new production of our own. On the other hand, they have had a positive effect because we got production up and running for components that we used to buy in America or Europe. Now we are already making them ourselves and we won’t have to buy them abroad ever again, if we can do them here. Or if, say, we had purchased something in the U.S. before, now we will buy it in Asian countries. That’s mainly components for microelectronics.

What about from Ukraine?

With Ukraine the process is still under way, because there was a lot that we produced there in Ukraine. The schedule is to have it done in 2017.

Are you setting up production for those parts in Russia or buying in Asia?

What we haven’t managed to do ourselves yet, we buy in Asia.