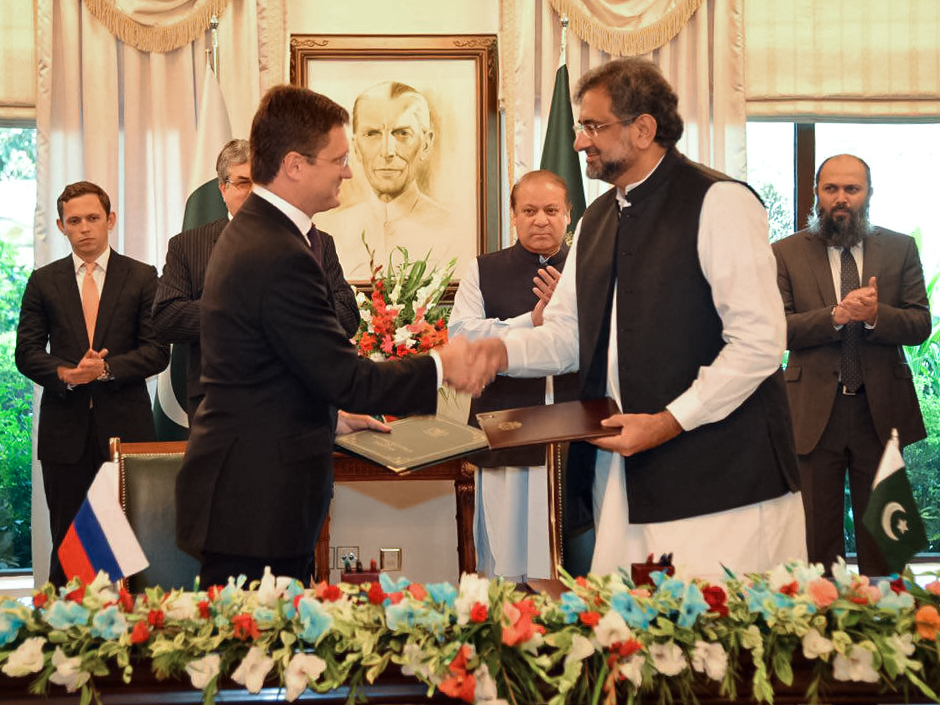 In Islamabad the governments of Russia and Pakistan have signed the intergovernmental agreement to construct the North-South gas pipeline from Karachi to Lahore. The project will be undertaken by Russian-based RT-Global Resources, a subsidiary of Rostec.

The construction of the pipeline will provide orders for Russian industrial enterprises and will boost non-raw-commodity exports.

The document was signed by Russia’s Energy Minister Alexander Novak and Pakistani Petroleum and Natural Resources Minister Shahid Khaqan Abbasi. The 1100-km-long gas pipeline with a potential capacity of 12.4 billion cubic meters per annum will link the liquefied natural gas (LNG) terminals in the port of Karachi in the south of Pakistan and the city of Lahore in the the country's north.

"Since the Soviet times, Russia has earned the reputation of a reliable partner in major international projects. The construction of the North-South gas pipeline is bringing economic cooperation between Russia and Pakistan to a new level," remarked Russia’s Energy Minister Alexander Novak.

The project will be run by RT – Global Resources on a BOOT (Build Own Operate Transfer) basis. The built pipeline will be owned and operated by the project company for 25 years. During this period payments for gas deliveries will help the company recoup their investment costs and make a return on investment.  After that the pipeline will be handed over to the government of Pakistan. Currently, RT-Global Resources is carrying out surveys and engineering work along the pipeline route.

The Karachi-Lahore gas pipeline is the first joint project between the Russian Federation and the Islamic Republic of Pakistan to be implemented under an intergovernmental agreement in a long time. The project will open up to Russian companies a new market and opportunities to embark on new projects in the energy implementation field in the Republic of Pakistan.

The Pakistani Government has plans for a large-scale development of the country's energy sector. Regasification terminals for liquefied natural gas (LNG) are currently under construction in the city of Karachi. There will be power plants built in the country's north to which gas will be supplied via the Karachi-Lahore link.

In addition, Chinese contractors are building another major pipeline Gwadar-Nawabshah in Pakistan that will provide a connection to the Karachi-Lahore gas pipeline.

"The project will engage as much as practical Russian manufacturers and contractors”, said Andrey Korobov, the Chief Executive Officer of RT–Global Resources. Specifically, Rostec is eyeing the possibility of contracting United Engine Corporation as a vendor for compressor station equipment.

Andrey Korobov made a special note of the fact that the bulk of the project investments will be channeled to Russian economy, which will contribute to an increase in non-raw-commodity exports.

State-owned gas supplier ISGSL will pay for gas transportation services as well as act as the customer and the partner on the Pakistani side. The Pakistani Government will, on its part, give a sovereign guarantee for the payment of gas supply tariffs and for the funding of the project.

The Russian side is weighing options of raising loans from Russian and Chinese development banks with the support of export credit agencies. RT–Global Resources will set up a consortium of Russian and foreign investors, including those from China and Pakistan, as well as potential EPC contractors.

Rostec takes up oil and gas infrastructure projects in Pakistan