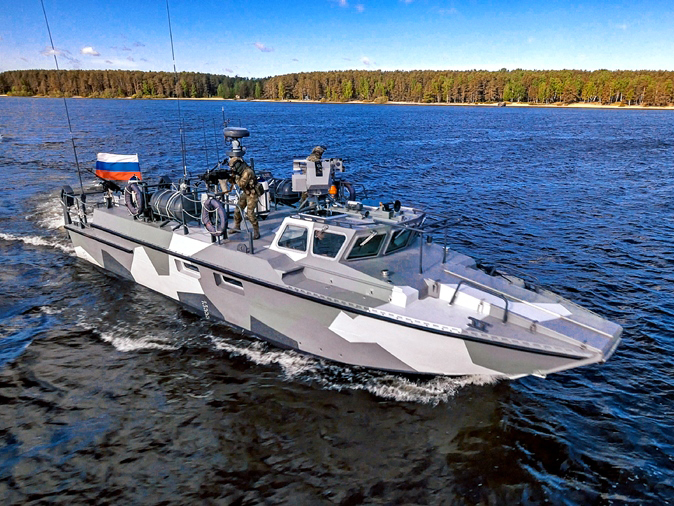 The Kalashnikov  Concern for the first time will introduce a unified combat group of multifunctional assault crafts with a modern set of weapons, as well as their latest developments in the field of unmanned aerial vehicles (UAVs) that can be launched from the deck of the craft.

The presentation of the development will be held at the 7th International Maritime Defense Show IMDS-2015, which is scheduled to take place July 1- 5, 2015, in St. Petersburg.

The unified combat craft group, developed on the initiative of and jointly with the specialists of the law enforcement agencies of the Russian Federation, includes the latest transport assault boat BK-16, assault boat BK-10 and the new fire-support craft BK-9, which has no counterparts in Russia and is equipped with armor plates to provide enhanced protection for the personnel of the landing group.

The vessels are equipped for having intelligence drones and modern armaments on board, including the combat remotely-controlled module

"At the International Maritime Defense Show IMDS-2015, we are planning to demonstrate the group of boats, which is, in fact, an innovative weapons system solution,” noted Aleksey Krivoruchko, CEO of the Kalashnikov Concern. “They are multipurpose vessels developed on the initiative of and in close cooperation with the specialists of the profiled law enforcement agencies of Russia.”

As stated by Aleksey Krivoruchko, each of the boats can be re-equipped to fit specific requirements and combat tasks. In addition, the vessels are equipped for having intelligence drones and modern armaments on board, including the combat remotely-controlled module. The weapons systems are interchangeable and can be installed to fit a specific task.

Their technical ability to develop the same speed equaling 40 knots and the guaranteed cruising range of up to 400 miles allow the boats to work in a coordinated manner in order to complete a single combat mission, providing high-speed delivery of assault squads to shore, fire support of special forces and marine troops, as well as expeditious implementation of patrol, sabotage and anti-sabotage operations.

The boats can be equipped with weapons systems to fit specific requirements and objectives. For instance, BK-16 can be equipped with four machine guns of the 7.62 mm caliber in combination with either a martial module, or with two machine guns of the 12.7 mm caliber, or with a grenade launcher of the 40 mm caliber. In addition, anti-sabotage mines, as well as a small-sized rocket system of the Kornet type, can be installed on the boats.

A UAV - ZALA 421-16EM light reconnaissance unit - can be launched straight from the deck of the boats. The main advantage of this drone is the preservation of advanced tactical and technical characteristics with a substantial reduction in size. The possibility of video transmission in real time within a radius of 25 km at any time of the day allows for ensuring continuous monitoring of strategically important objects, determining coordinates of the target for taking prompt action to adjust the activity of the special services troops and ensuring safety of personnel, while maintaining acoustic and visual obscurity.

The craft and drone system allows for quick selection of the safe personnel disembarkation point, as well as for coordination of actions of the entire group or each separate fighter at the time of the special-forces raid.

Kalashnikov is supporting the World Championship in Practical Shooting