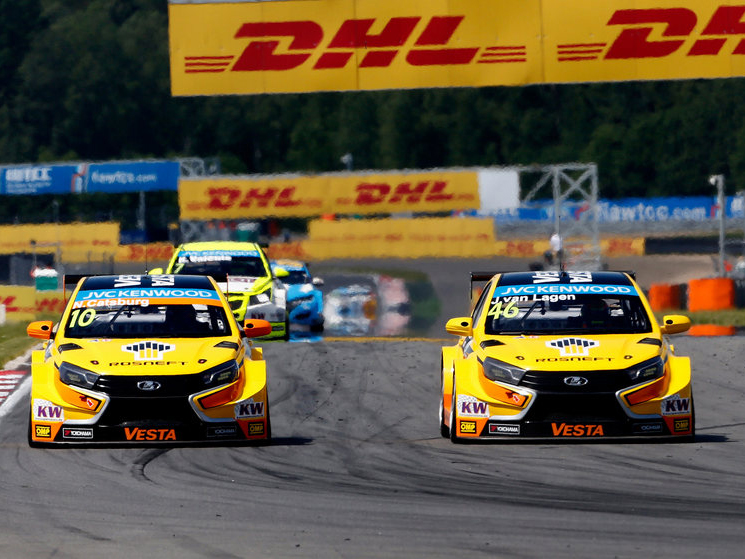 The Russian team Lada SPORT ROSNEFT made it to its first podium of the World Touring Car Championship (WTCC) for the 2015 season during the Moscow stage. Driving a Lada Vesta TC1, Briton Rob Huff finished second in one of the races and set a best lap time.

Throughout the weekend, Vesta automobiles showed impressive speed during in test sessions, free practice, and qualifying runs. During the competition in its home country, the team performed quite well: Rob Huff came in fourth during the first race, an achievement repeated by the rookie team member, the Dutch driver Nick Katsburg, during the second race. Jaap van Lagen also made a contribution to the total number of points, finishing tenth in the first race. In the second race Rob Huff made it to the finish line just behind the leader, thereby sending the team to its first podium of the season.

“This was a great weekend for me. My Lada Vesta was on the attack today and I managed to win back my position and actively forge ahead from the back of the field. I think our current performance at Moscow Raceway convincingly shows off all the features of the Lada Vesta. We can achieve a lot with this car!” said Rob Huff, sharing his impressions of the race.

For the Dutch driver Nick Katsburga, the WTCC stage in Moscow was not just his debut in the Lada SPORT ROSNEFT team in a Vesta, but also his first experience in touring races. He previously specialized in marathons and endurance races.

"I was very comfortable working with the team, and, of course I really enjoyed the car. The TC1 technical class and the touring driving style are new to me, but I'm pleased with the result from the weekend. It’s impossible not to be happy with such a high finishing position for the home team during this race,” said Nick Katsburg.

According to team leader Viktor Shapovalov, a good result at home was expected, as it was clear that the Lada Vesta had a lot of potential since the beginning of its development.

“In its very first race, it was already apparent that the car had good speed. The systematic work that went into it has led to results. I am sure that very soon Vesta will regularly find itself in the top position. I am very happy for the team!” said Viktor Shapovalov.

The next race for the Lada SPORT ROSNEFT drivers will be the sixth stage of the WTCC, which will take place June 20-21 in Slovakia.

Sales of the Lada Kalina with automatic transmission have begun