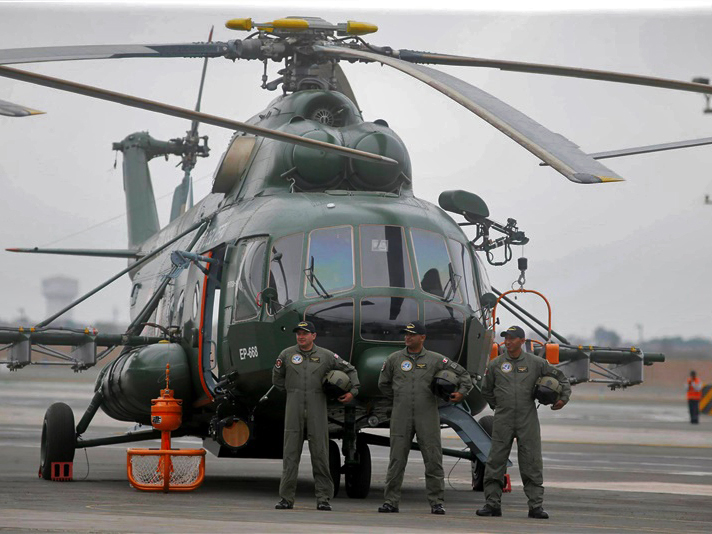 According to the contract signed with Rosoboronexport, Russian Helicopters delivered 8 military-transport helicopters Mi-171Sh to the Peruvian Ministry of Defense. The Peruvian leadership holds the helicopters in high regard.

A ceremony for the Peruvian Air Force’s reception of new Mi-171Sh helicopters was attended by Peru’s President, Ollanta Humala Tasso, the Peruvian Defense Minister Pedro Kateriano, and other of the country’s senior officials. Humala Tasso noted that his country will rank third in Latin America in terms of power in terms of the number of transport helicopters in service.

Defense Minister Pedro Kateriano said that the completion of the fleet of Russian helicopters will restore the operational capabilities of the Peruvian Air Force, as well as renew logistics bases and remote border observation posts. The commander of a group of armed forces, Omar Gonzalez, said that among the advantages of the Mi-171Sh high-thrust engines, the helicopters are capable of operating at high altitudes, including among the highlands of the Andes.

During the ceremony, the President of Peru personally piloted a take-off in one of the helicopters and made a half-hour flight, after which the pilot underscored the comfort and high performance characteristics of the helicopter. Representatives of the Ministry of Defense of Peru commended the quality of the helicopters’ manufacturing and mentioned a wide range of their accessories.

The Mi-171Sh will help provide aid in the provinces located in the Amazon regions and the Andes highlands. The craft will be useful in conducting military operations in the Apurimac, Ene and Mantaro river valleys for combating drug trafficking, terrorist groups, and organizations involved in illegal mining.

The Mi-171Sh is produced at the Ulan-Ude Aviation Plant, which is a member of the Russian Helicopters. In 2014, Peruvian specialists were successfully trained in the factory aviation training center. The pilots trained at the newest complex for the chopper, learning advanced techniques and the rules of piloting the helicopters in various conditions. In addition, technicians were trained to service the helicopters.

The contract for the delivery of 24 helicopters to Peru was signed in December 2013 with the Russian state-backed special exporter Rosoboronexport (Russian Defense Export). According to the terms of the contract, Peru will be delivered 24 helicopters, including two batches of 4 helicopters which were sent in 2014, and the rest, in 2015.

A center for the maintenance of Russian helicopters will also be set up in Peru. The delivery of the first Mi-171Sh to Peru was made a month ahead of schedule. Along with the helicopters, the proper aerotechnical equipment was sent for maintenance
and use.