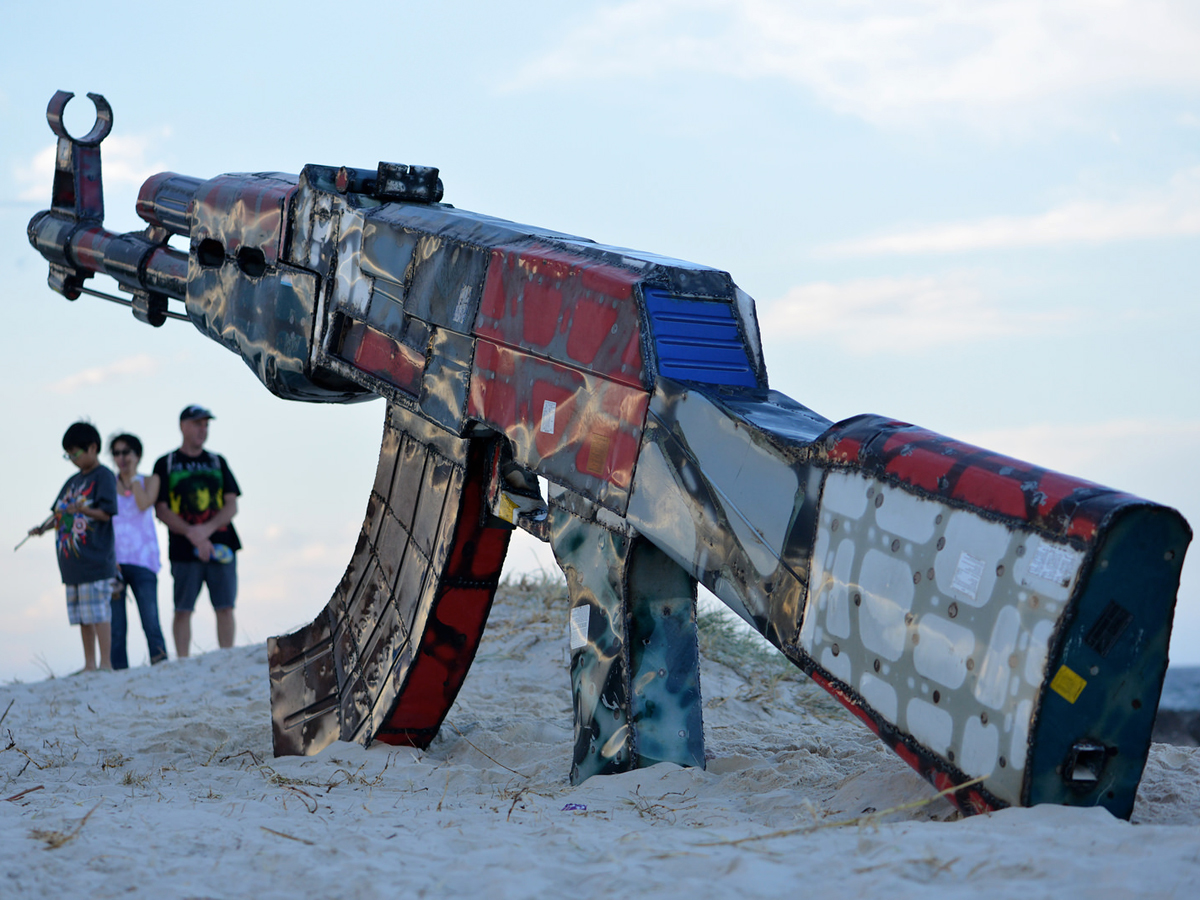 Assault rifles based on the Kalashnikov model are so common in the world that in some states it is often cheaper to buy a rifle than daily essentials.
The AK is officially assembled in 12 countries, but unlicensed and clandestine producers are impossible to count.

In the postwar years, the prevalence of weapons of varying quality, safety, performance, and calibers among the armies of the East-European and pro-Soviet Asian countries caused disorder. These included even outdated Soviet-style and looted German rifles, assault rifles, and submachine guns. There was an urgent need to develop an overall system.

After some debate, the Warsaw Pact military forces decided to use the Soviet 7.62x54 mm rifle cartridge as ammunition for machine guns and sniper rifles, and for primary ammunition, the 7.62x39 mm intermediate cartridge was approved in 1943. Soon, the Soviet Union began to give free licenses for manufacturing the AK to friendly nations. 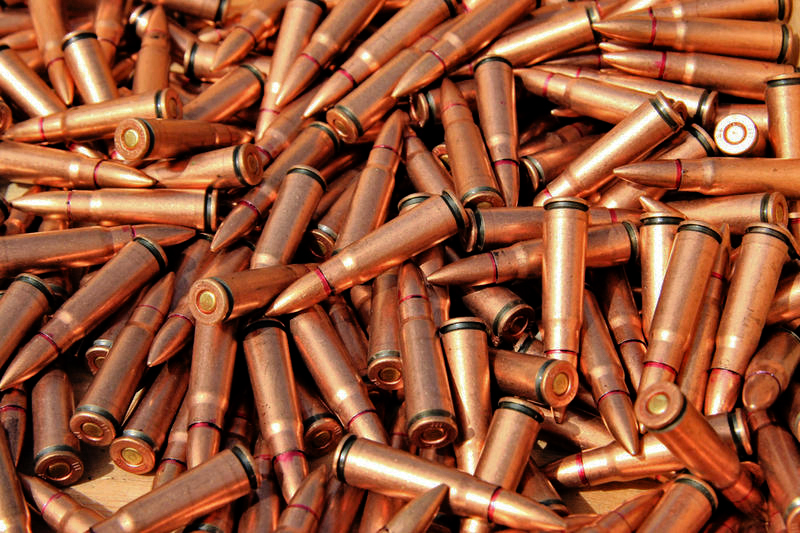 The first nation to receive a license, technical documentation, training opportunities, and training of personnel, plus new equipment for the production of weapons and ammunition, was the Hungarian People's Republic, where, on January 1, 1955, FEG launched an exact replica of the Soviet AK, the AK-55. In the future, the military-technical cooperation between the USSR and Hungary continued, and all modifications of Soviet weapons were made available for production in Hungary.

The next country to begin producing the Kalashnikov assault rifle was China. They gave their assault rifle the name “Type-56”. It is generally similar to the AK, except for the integral spike bayonet in stowed position, which folds down and back. Also, there was no chrome barrel bore, gas piston, or action on the early issue assault rifles, which reduced the survivability of these components.
The Type-56 was in service with the Chinese army for 30 years and now continues to be produced for export. 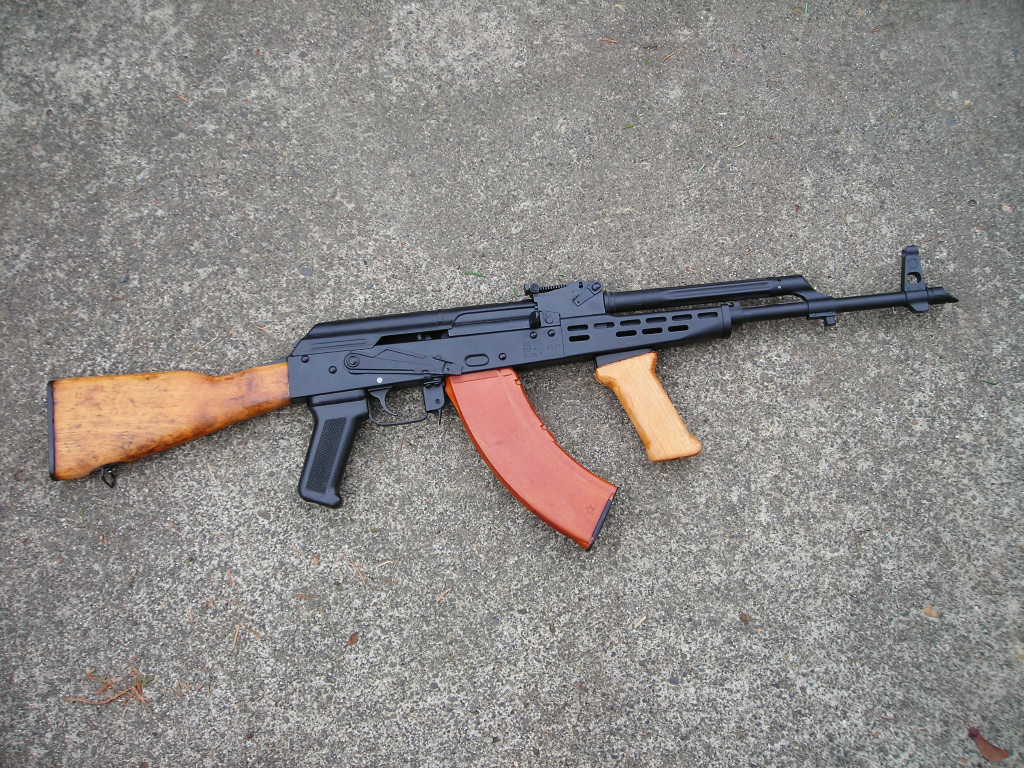 After China, with a minimum time interval, the production of the famous Soviet weapon was also established in the German Democratic Republic, Poland, Bulgaria, Romania, North Korea and Yugoslavia. In addition, Egypt, Syria, Libya, Cuba, Lebanon, and India all engaged in CKD (complete knock down) assembly of the weapon from Soviet components. 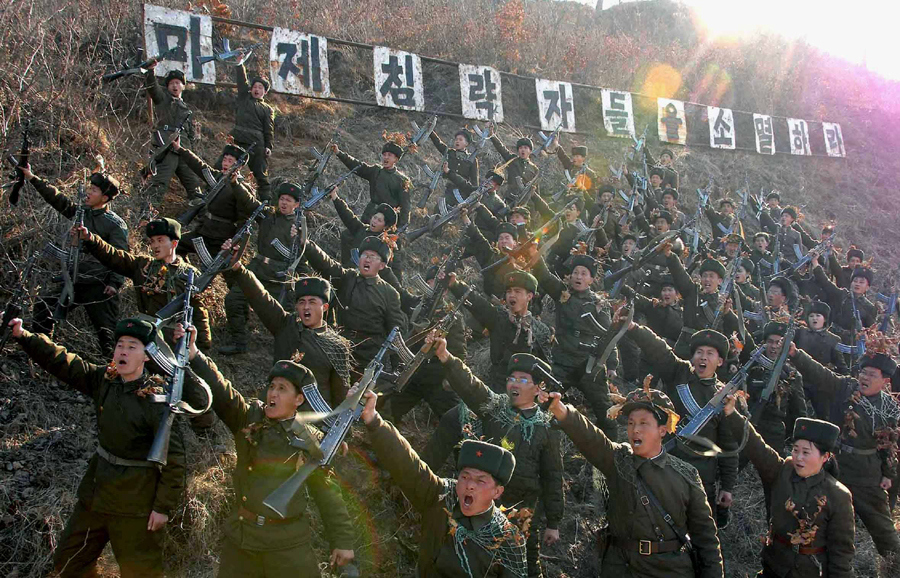 Small arms such as the AK were not only prevalent among countries of the socialist camp, but the assault rifle’s reliability, ease of use, and simplicity of design led to the emergence of production clones in other countries as well.

FINLAND
In the 1950’s, when the Finnish army faced the question of rearmament, it decided to not waste time and make their own weapons on the basis of already known foreign analogues. Thanks to the normalization of relations with the Soviet Union, the Finnish army largely focused on the Soviet model. This led to their choice in favor of the Soviet Kalashnikov, and soon after Finland acquired a license to manufacture it. In Finland, the AK transformed into the Valmet Rk 60. Being an exact copy of the Kalashnikov assault rifle in terms of all mechanisms, it looked quite noticeably different from the AK on its exterior. 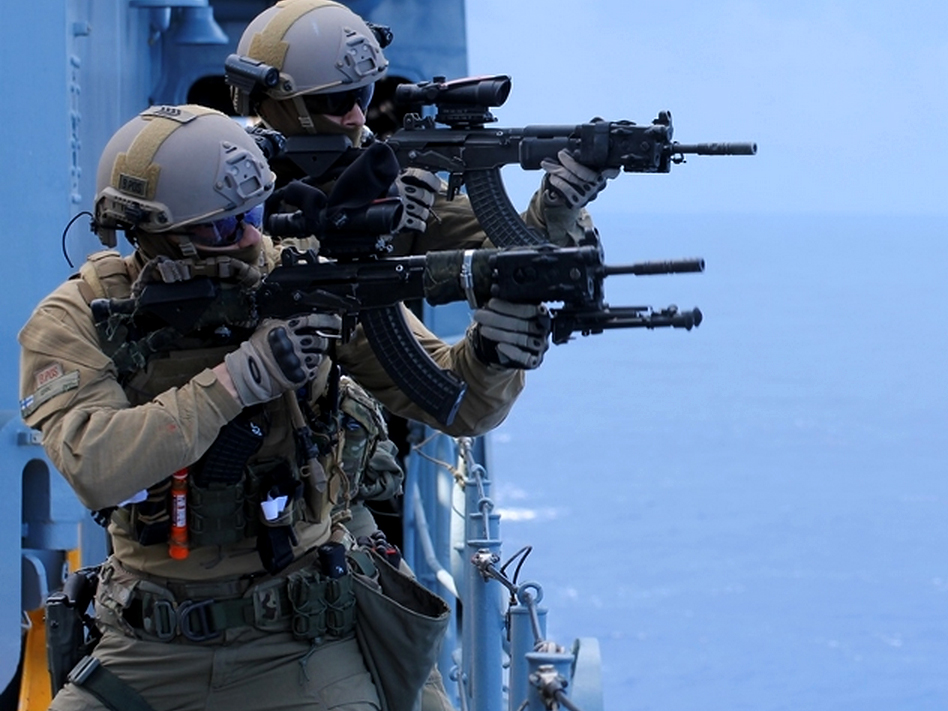 ISRAEL
The development of the Israeli rifle preceded the events of the Arab-Israeli conflict in 1968. This resulted in the arming of Israeli troops with several thousands of brand new Soviet produced AK-47 and AKM, which were highly regarded by the soldiers. The leadership of the Israeli army decided to create an assault rifle that was “the same as the Russian AK, only better.” Given that diplomatic relations with the Soviet Union were severed, the Finnish company, Valmet, was chosen, which sold the Israeli side the necessary equipment, tools, and, schematics and provided installation and adjustment specialists.
Yisrael Galili (Balashnikov by birth) presented his model, based on the AK-47, and beat out the other competition for developing Israel’s first assault rifle.
In 1973, the first 10,000 Galil AR entered service in the Israeli army. 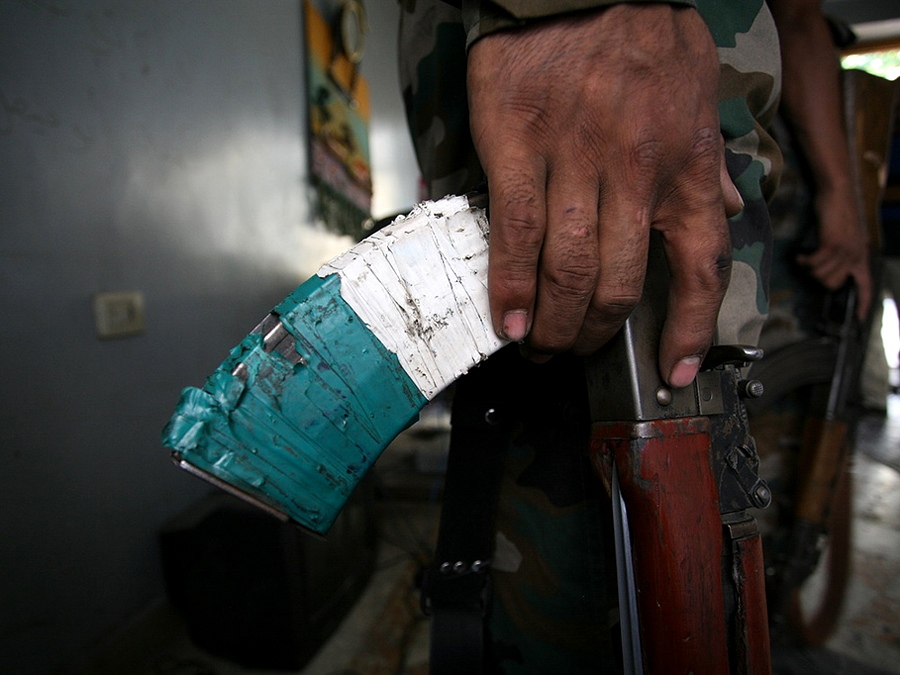 SOUTH AFRICA
From 1970-1980, due to the close defense cooperation between Israel and South Africa, the 5.56 mm R4 was developed, which essentially was a perfected version of the Galil. The R4 entered service in the South African army in 1982, replacing the Belgian FN FALn rifle. Modifications of this weapon were intended to meet the more rigid requirements of combat operations. Initially, the R4 was equipped with a typical butt. However, it was later replaced by a metal stop bolt, which pivots to the right. Each rifle came with an attached, removable bipod.

CROATIA
The APS-95 was designed to replace the Croatian Zastava M70 rifles remaining in service after the breakup of Yugoslavia. Croatia’s decision to develop a new rifle on the basis of the Galil (which, in turn, was developed on the basis of the Kalashnikov assault rifle) was made after its positive experience operating its South African clone (the Vektor R4).
The APS-95 was developed in 1993, and two years later it was adopted for partial arming of the Croatian army, but lack of funding prevented the army’s complete rearmament. 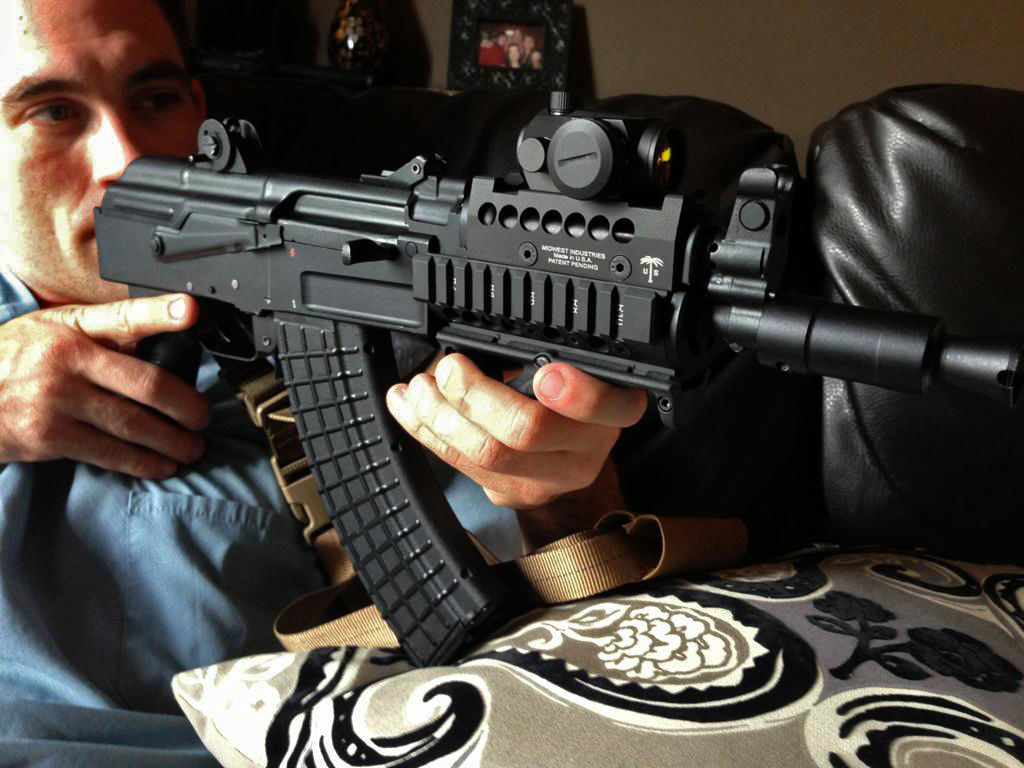 THE BULGARIAN “ARSENAL”
The Bulgarian-made AK has always been considered a weapon of high reliability and quality. At the moment, Bulgaria offers a vast number of Kalashnikovs with a wide variety of modifications for any caliber.
Arsenal has handled the production of Bulgaria’s AK, and it recently opened a branch in Nevada with start-to-finish production for the US domestic market. The plant assembles both civilian versions of the Arsenal and versions with automatic fire capability.

Rostec to transfer the control over IMZ to private investors