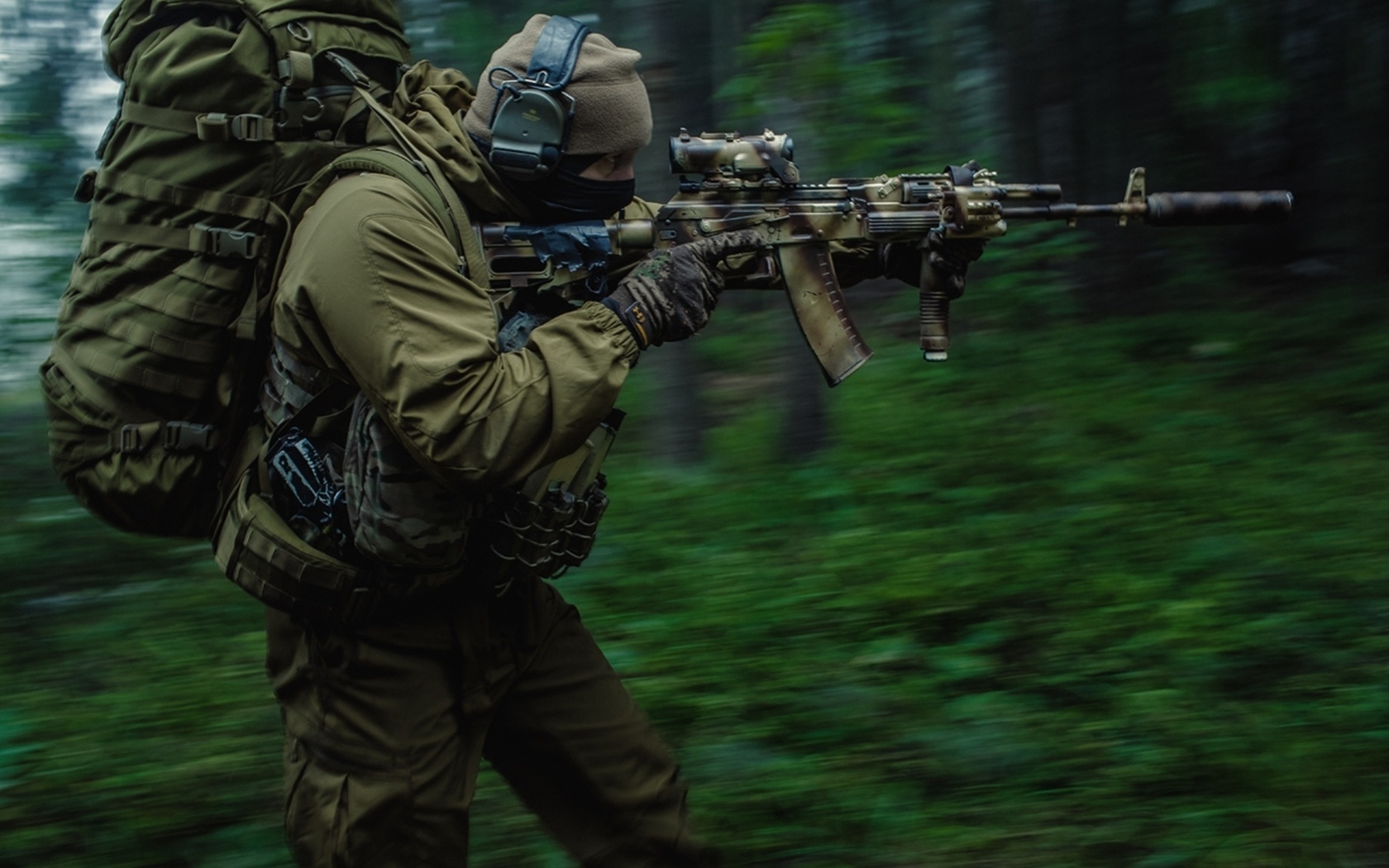 More than 100 million Kalashnikov assault rifles have been manufactured over the 60 years it has been in production. What was the progress of designer thought behind the five generations of the best-known sub-machine gun in the world?

What makes the Kalashnikov assault rifle popular is its simple design, ease of operation and excellent reliability. It can be used in any weather and at any temperatures from the freezing Arctic to equatorial heat. The assault rifle is highly resistant to fouling – even if small grains of sand, water, or mud get inside the rifle, it can still be fired.

So what is the design and development history of the assault rifle representing 1/5 of the entire small-arms arsenal on Earth?

Mikhail Timofeevich Kalashnikov was conscripted to serve in the Red Army in the fall of 1938. It was then that he demonstrated his inventor skills by developing an inertial shot counter for a tank cannon, an attachment to the Tokarev handgun to make it more effective for shooting through firing slits in the tank’s turrets, and a engine life counter for tanks. 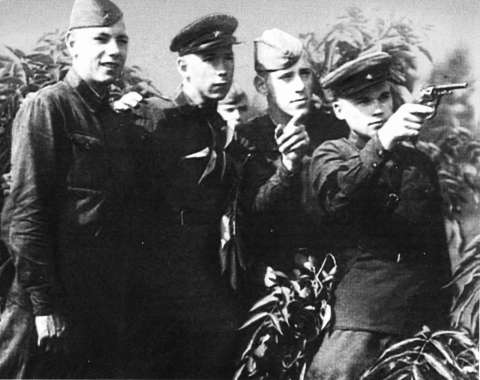 By 1946, Mikhail T. Kalashnikov created several firearm designs, including two machinegun pistols, one of which had a very original semi-free bolt braking system, a hand-held machine gun and a self-loading carbine fed from cartridge cartons.

In December of the same year, the first early version of an experimental automatic rifle was produced at an arms factory in Kovrov, chambered for the intermediate 7.62×39 mm cartridge, which is now sometimes designated as AK-46, was presented for testing.

This early version did not have many features of the future AK: it had its pullback cocking lever on the left, and there were two separate flag-type safety and firing selector instead of the now-customary single safety/fire selector, while the firing mechanism cover flapped open down and forward on a pin. 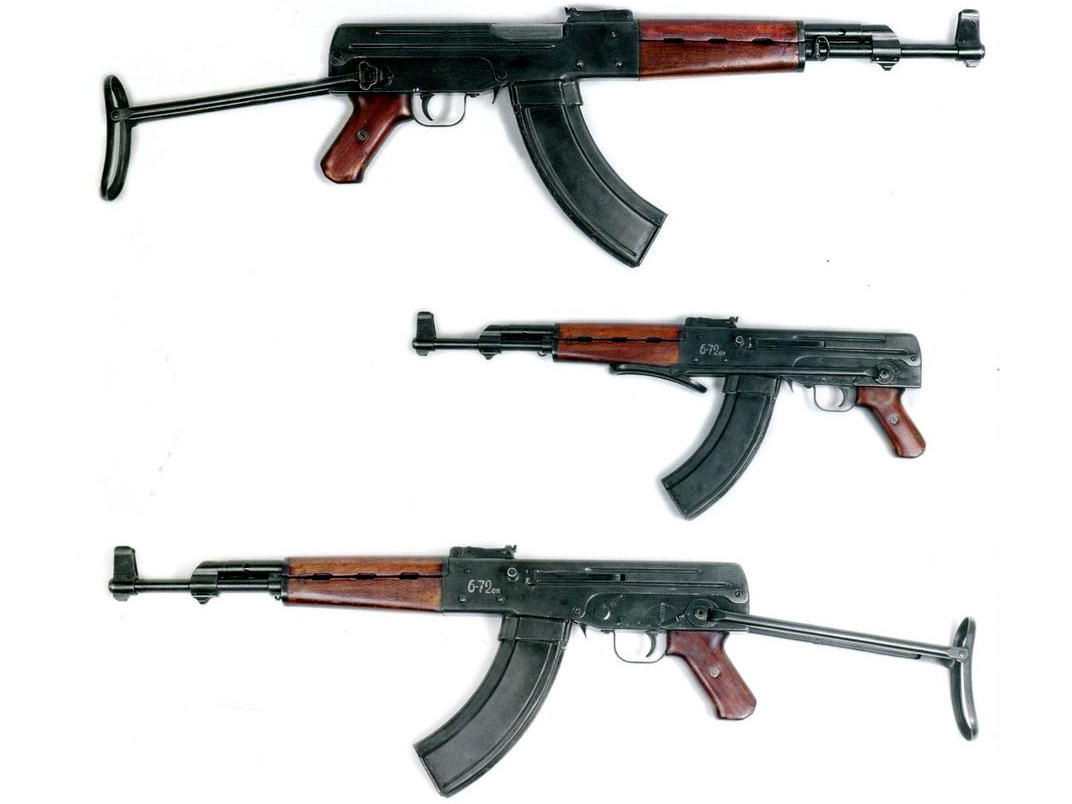 After the tests, the original Kalashnikov assault rifle was deemed to be inadequate for further development. However, Mikhail T. Kalashnikov appealed that decision, returning to Kovrov for the purpose, ,where he developed what was essentially a completely new assault rifle, within a record time.

The assault rifle did not have a classic one-piece stock. Separate wooden stock and left-hand grip mounted on a robust receiver made it easy to hold the weapon when shooting. The receiver was completely redesigned, with a rigidly attached special insert connecting it to the barrel making it different from the previous versions.

The bolt handle now designed as part of the bolt carrier assembly was moved to the right side, following requests from soldiers who tested the weapon, who noted that having the bolt handle on the left interfered with firing a weapon while on the move without stopping first, as it caught on the soldier’s abdomen. Reloading the weapon was also problematic in this position.

And after the second round of tests in 1947, the prototype was recognized as the most reliable. After initial army trials in 1949, the Kalashnikov assault rifle was formally approved for service as the 1947-type 7.62mm Kalashnikov submachine gun.

In the same year, Mikhail T. Kalashnikov was hired to join the senior designer’s team at Izhmash, where he got involved in developing and upgrading the AK-47 further.

Upgraded AKM and AKMS assault rifles were put into service in the late 1950s. Changes in production technology and use of plastics could reduce the weight of the weapon by 700 grams compared to the original. Higher accuracy and lower closer pattern of bullet spread were achieved by adding a trigger retardant, which reduced the rate of fire from 660 to 600 rpm; the bolt carrier assembly was modified as well. A muzzle brake was later added to the AKM to reduce the barrel climb when firing. The accurate firing range was increased to 1000 meters. 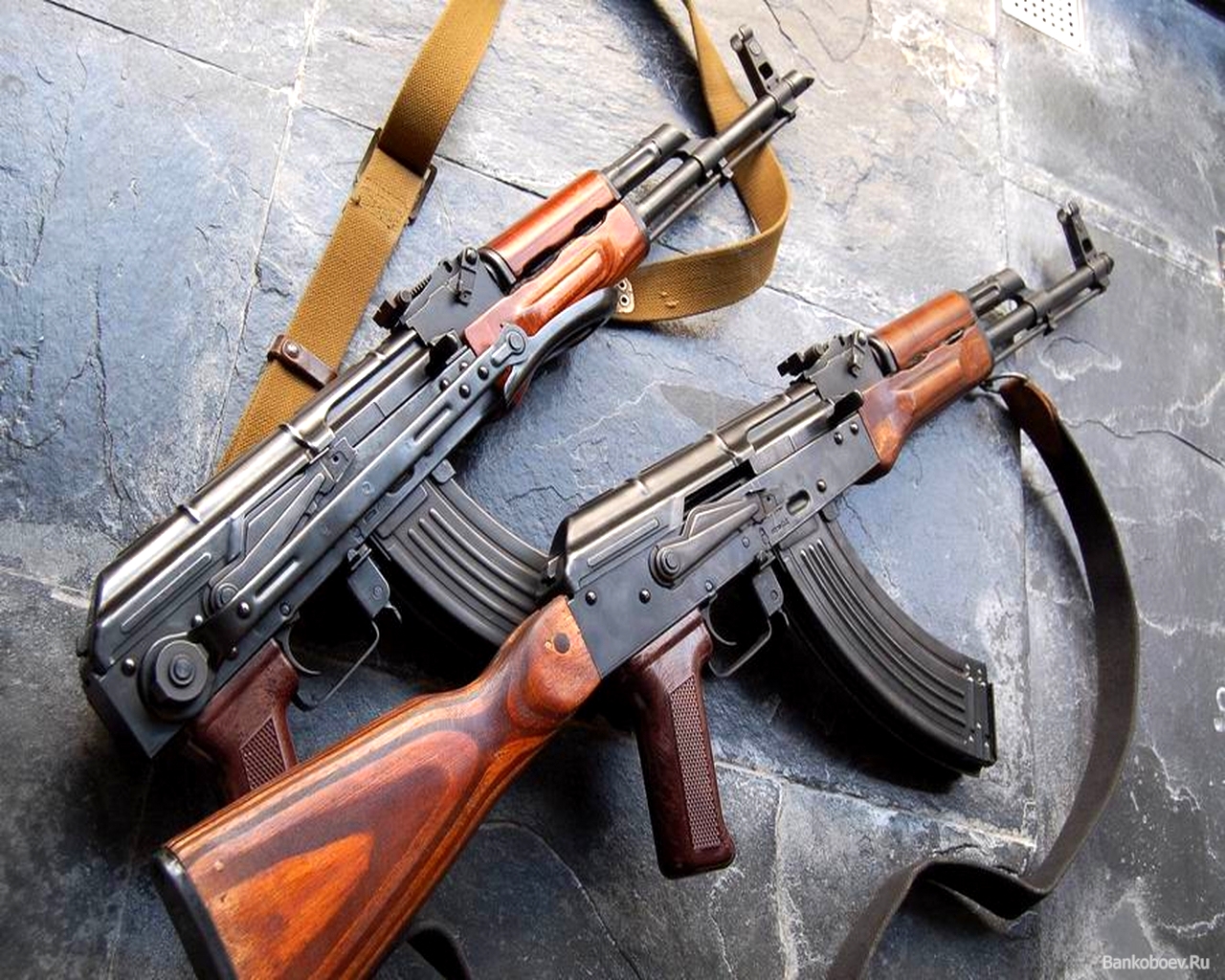 Development of small arms over the past 200 years has gone hand-in-hand with consistent reduction in weapon caliber. As soon as practical experience confirmed that smaller calibers are both possible and useful (this point had been supported by theory years before that), full-scale development work on smaller-caliber weapons started both in the Soviet Union and other countries. 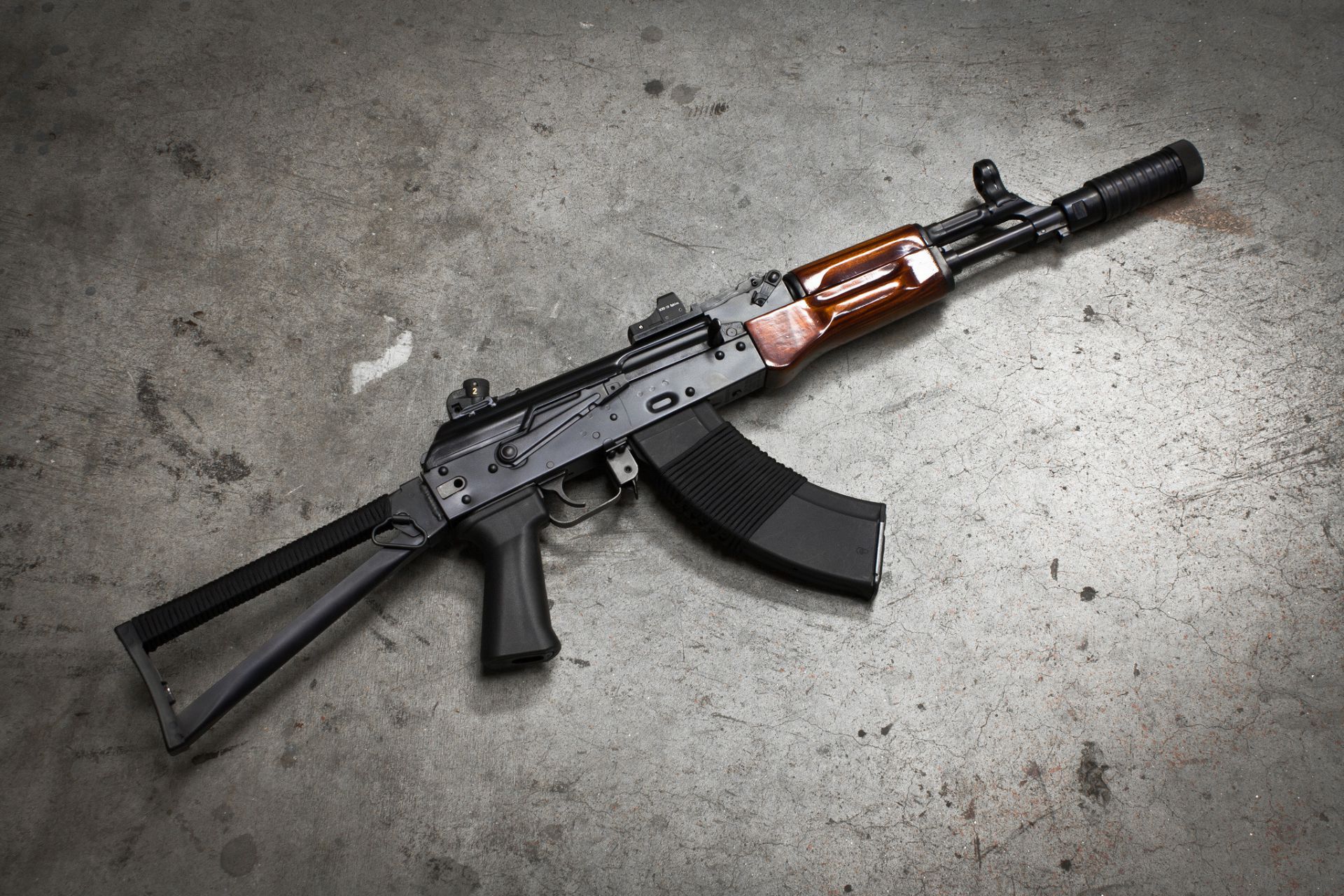 An assault rifle chambered for a 5.45mm cartridge was adopted for service in 1974 as the Kalashnikov AK-74. The related man-portable machine gun RPK-74 and AKS-74 assault rifle with a folding stock for paratroopers were introduced at the same time. The smaller caliber helped to reduce the magazine weight, while increasing the bullet’s barrel velocity to 900 m/s, while a new design of the muzzle brake made it possible not only to offset the recoil, but also make shooting less loud.

The left-hand grip and stock of the new assault rifles were originally made of wood, but later, they began to be manufactured from plastic. The so-called “night” version, Kalashnikov AK-74N were introduced with a side rib for attaching infrared night-vision scopes.

The fourth generation of Kalashnikov assault rifles began with the Kalashnikov AK-74M, which was adopted for service by the Russian army from the early 1990s. The main differentiator of this assault rifle from previous models was that it replaced all of AK-74, AKS-74 and AK-74N thanks to having a black plastic folding stock (folding to the left) and a universal rib for attaching scopes on the left of the receiver. In addition, the receiver cover was reinforced to prevent it from detaching catastrophically when firing a 40mm under-barrel grenade launcher. 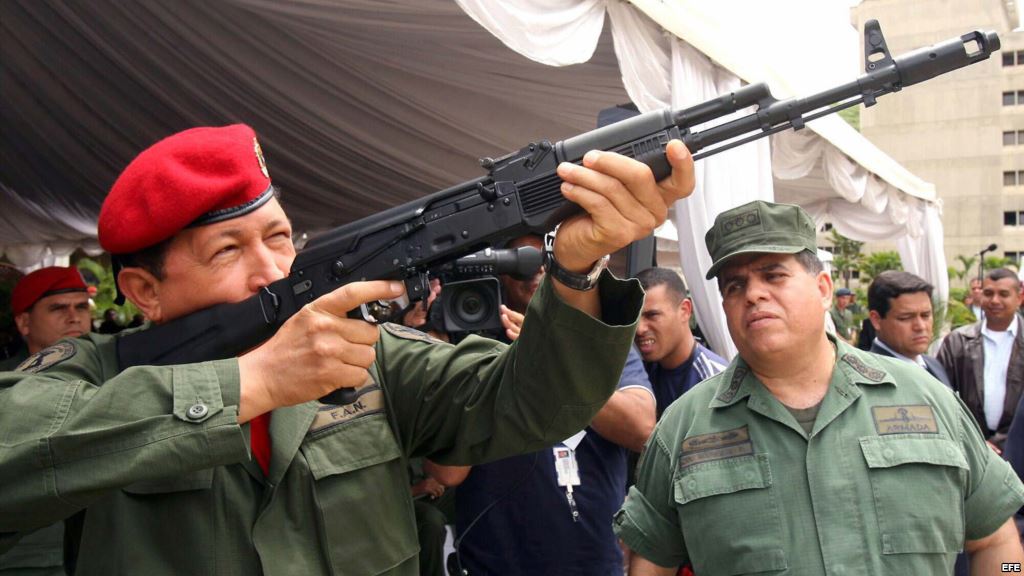 The new assault carbine was developed from June 2011, with firearms designer Vladimir V. Zlobin leading the development effort and using the ideas and new concepts developed over the previous decade.

The key difference of the new carbine is its improved ergonomics: a person can operate the mechanical controls of the assault rifle with one hand: a soldier can still do everything he needs to do with the weapon: move the safety, pull back the bolt and replace the magazine even if wounded or when using his other hand. 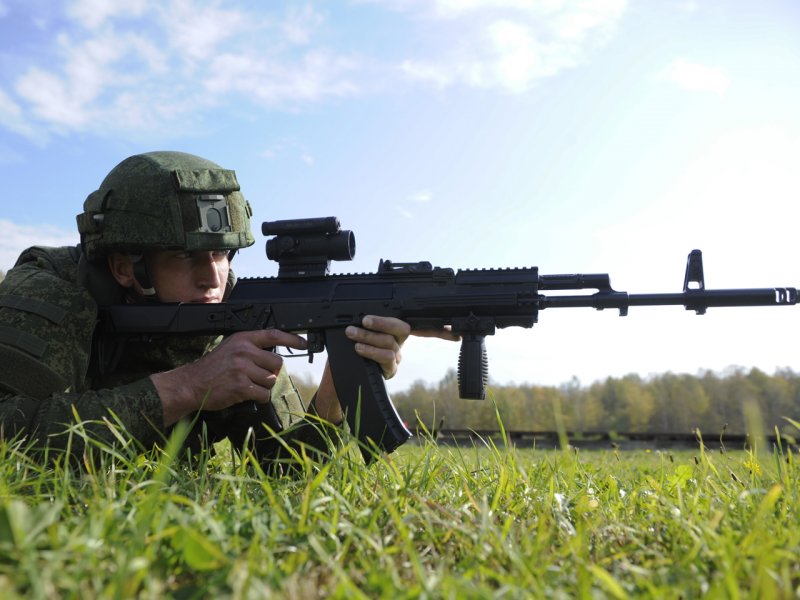 The AK-12 uses long-action operating rod with a rotating bolt. However, the bolt assembly and the dual action trigger firing mechanism have seen substantial improvements.  The assault carbine has a folding adjustable-length and cheek piece height plastic stock. In addition, the bore centerline is aligned with the stock in the AK-12, reducing the recoil shoulder, which helps to improve firing accuracy.

One of the most highly anticipated innovations in AK-12 design was the last-round catch with a button on the right-hand side of the receiver, above the magazine. Adding this part helped to reduce significantly the reloading/magazine-changing time. The AK-12 assault carbine also has a new ergonomic fire selector control.

Rostec to transfer the control over IMZ to private investors

Kalashnikov has not refused to work with Steven Seagal