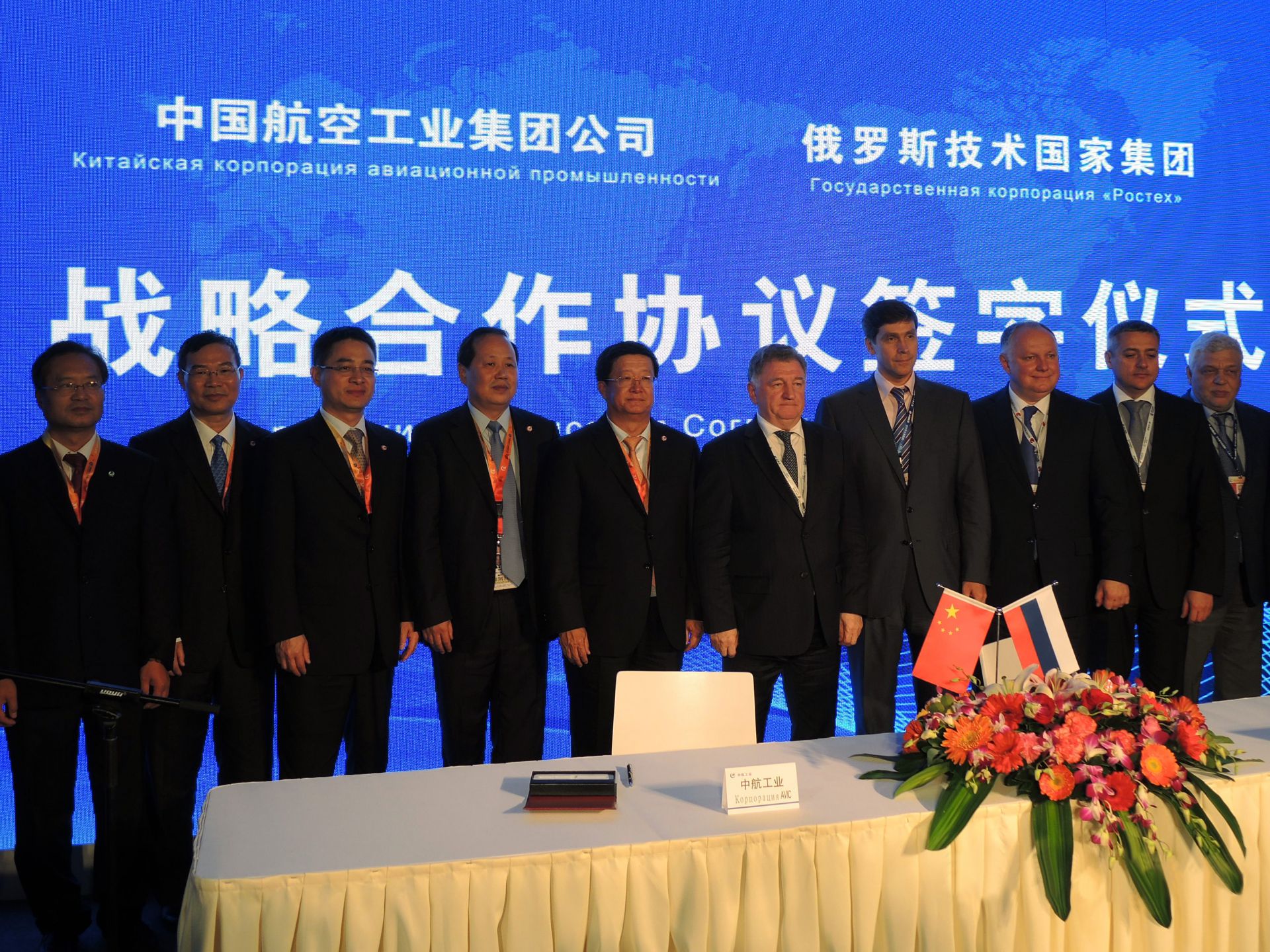 Rostec Corporation and the Chinese industrial aviation corporation AVIC have reached an agreement regarding strategic cooperation, which will significantly increase interaction between the two companies. Plans are being made to work out the possibilities for implementing joint projects in aircraft, helicopter, and engine production, as well as in the manufacturing of aircraft materials, avionics, and similar products.

Nikolai Volobuev, Deputy CEO of Rostec Corporation, and Li Yuhai, Deputy CEO of AVIC, signed the agreement for strategic cooperation on behalf of their two corporations on November 11, 2014, as part of the tenth Airshow China, held in the city of Zhuai.

“Increasing cooperation with Chinese partners is part of Rostec Corporation’s strategic plan for international cooperation,” said Nikolai Volobuev. “We particularly value cooperation with AVIC, which will impact key industries for which Rostec Corporation has all the necessary competencies, such as the fields of helicopter and engine construction, as well as the manufacturing of aircraft materials, avionics, and other onboard electronics equipment. Cooperation with AVIC allows our corporation to implement new projects that will also highlight the potential of Russian scientists and engineers.”

This agreement could lead to the implementation of joint projects in the Russian Federation, China, and other countries while also providing additional benefits for warranties (increase in warranty periods, minimizing the period of warranty repair and maintenance) and ensuring mutually beneficial arrangements for post-warranty service.

Russian Helicopters, United Engine Corporation, and other Rostec Corporation subsidiaries have already actively pursued cooperation with companies such as Avicopter and AVIC Engine through work on projects such as a heavy helicopter. This is the banner cooperation project between the two companies, which benefits from the close attention of both of the governments.

AVIC is also considering partnering other Rostec enterprises besides Russian Helicopters and United Engine Corporation. For example, VSMPO-AVISMA has signed an agency agreement to manufacture and sell titanium and aluminum prefabricated products to AVIC. KRET is considering a partnership that will enable them to shape the format of the next generation of avionics and other onboard systems. In September 2014, a delegation from AVIC visited an enterprise of the holding company RT-Chemcomposite in Obninsk. The Chinese delegation expressed interest in establishing cooperation with Russian partners in the research and manufacturing of products made from silicate glass.

Rostec Corporation is a Russian corporation established in 2007 to promote the development, production, and export of high-tech industrial products for civil and military use. The corporation brings together around 700 enterprises across 9 defense industry holding companies and 5 civilian industry holding companies. Rostec subsidiaries can be found in 60 regions of the Russian Federation and export products to markets of more than 70 countries. In 2013, Rostec earned 1.04 trillion rubles in revenue, with 40 billion rubles of net profit. Tax payments to the budgets of all federal levels exceeded 138 billion rubles.

AVIC is China’s leader in the aviation industry, as well as one of the top companies in the global aviation industry. The corporation maintains strong partnerships with leading aviation companies worldwide and is ranked by the journal Forbes in 178th place among the world’s 500 largest companies. AVIC manufactures advanced aviation products, including the MA and Yun-12 series of turboprop regional passenger aircraft and the AC313 and AC311 helicopters

The crew of Mil Mi-26 saved a polar bear cub