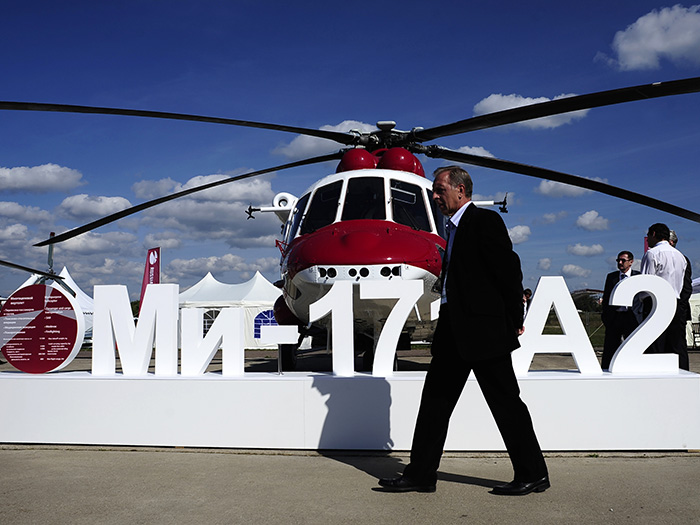 Russian Helicopters and KRET have begun testing the Mi-171A2 helicopter with the KBO-17 avionics system. The hovering test flight are taking place at the flight test facility of the M. L. Mil Moscow Helicopter Plant’s National Center for Helicopter Construction.

For testing, the KBO-17 was installed on the first prototype of the Mi-171A2, which was presented at the International Aviation and Space Show in Zhukovsky in 2013.

The KBO-17 flight and navigation system was created at KRET’s Ulyanovsk Instrument Design Bureau. With the advancements introduced in the KBO-17, the Mi-171A2 can safely fly at any time, as well as in adverse weather conditions. To ensure safe flying, the system displays GPS/GLONASS satellite information, mapping, VOR/ILS navigation data, weather information, and alerts about any upcoming obstacles (power lines, masts, isolated trees, etc.). Upon request, the KBO-17 system can also be equipped with the KOS-17 24-hour surveillance system.

The dashboard for the KBO-17 system is a “glass cockpit” model made up of five multifunctional liquid crystal displays. During each stage of the flight, the displays show the most important information to enable flight crews to evaluate comprehensively the performance of helicopter and its navigational systems.

The system is also equipped with a general helicopter control system that eliminates the need for a flight engineer without compromising flight safety, reducing the mandatory crew of the helicopter to two pilots.

Currently two helicopters are involved in the testing of the Mi-171A2: a “flying laboratory” created on the basis of the serially produced Mi-8/17 helicopter and the first prototype of the Mi-171A2 (OP-1). Construction on the second flight model (OP-2) is currently being completed at the M. L. Mil Moscow Helicopter Plant and will join testing later. In addition, two glider helicopters are also undergoing bench testing of static and repeat-static (fatigue) tests. Russian Helicopters is planning to complete certification for the Mi-171A2 in 2015, according to the press service of the holding company.

Russian Helicopters is a world leader in the helicopter industry and the only developer and manufacturer of helicopters in Russia. Formed in 2007, the holding company has its head office in Moscow and also oversees five helicopter plants, two design bureaus, and manufacturing enterprises and component service providers that provide after-sales support throughout Russia and abroad.