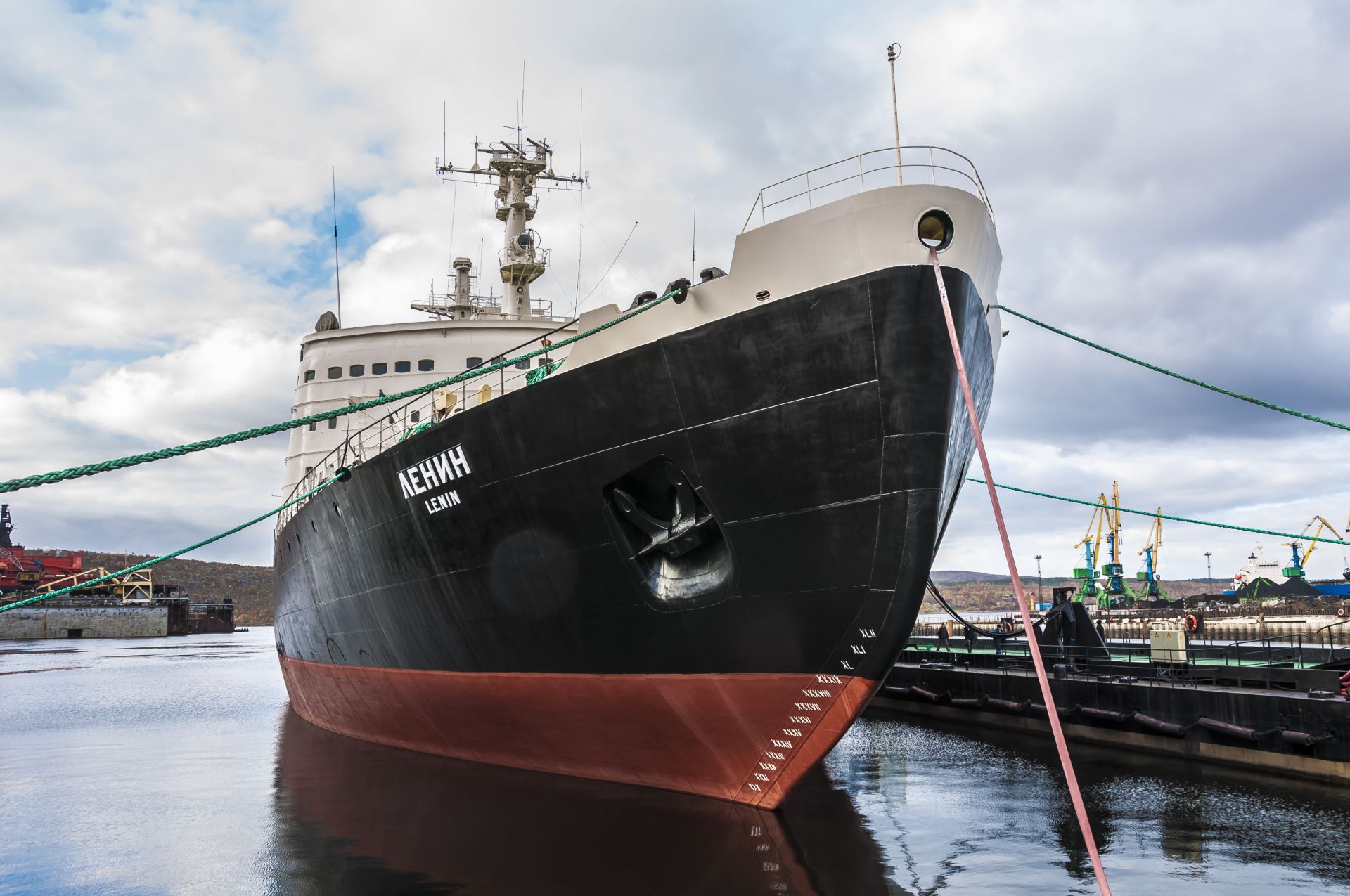 It is 55 years from the day when the Lenin Icebreaker set off on its first sailing. Automated equipment for the ship was manufactured at KRET enterprises that are now subsidiaries of the Rostec Corporation.

On September 15, 1959, the Lenin Nuclear Icebreaker, which has become a true legend of the twentieth century, set off on its maiden voyage. The control and safety systems for the world's nuclear-powered ship were designed at AVECS, which is now part of KRET. During its service the famous icebreaker traveled 360,000 km, which is a distance that is the equivalent of almost 30 equators, while guiding 3,741 ships through the Arctic.

"The Lenin Nuclear Icebreaker is set afloat!" Exactly 55 years ago this message announcing yet another of our country’s achievements spread all over the world.

Despite the fact that a huge number of technical difficulties had to be overcome during the course of construction, the new icebreaker was able to be built in an incredibly short period of time: its keel was laid in 1956, and it had already begun sea trials at the beginning of 1959.

The first nuclear-powered icebreaker in the world represented an important stepping-stone in the fight for leadership. The Soviets were proud; the icebreaker was shown to distinguished guests.

A nuclear-powered ship is the right move

The government of the USSR decided to develop a nuclear-powered icebreaker for service along the Northern Sea Route in 1953. The need for such an icebreaker was acutely felt.

A large amount of fuel consumption was required to conduct vessels through the ice. A powerful icebreaker could burn through up to 3 tons per hour. Consumption was about one-third the weight of diesel-powered icebreakers, and its reserves were enough for no more than 30-40 days.

The new icebreaker was intended to provide service along the Northern Sea Route, which presented the shortest route to connect the eastern and western parts of the country. Symbolically, the total length of the icebreaker's welds was more than 6,000 km, or two thirds of the distance between Moscow and Vladivostok.

A nuclear heart and marvel of industrial design

The new icebreaker was innovative for its time. The ship's designers were able to solve the complex tasks of creating a power plant, developing a body frame of unusual strength and automating the control system for the nuclear power plant.

The fundamentally new control and safety system for the nuclear-powered icebreaker was developed at Experimental Design Bureau No. 12 (OKB-12). Today it is known as Aviation Electronics and Communications Systems (AVECS), which is a subsidiary of the Concern.

Starting in 1947 the team at the enterprise under the guidance of Academician I. V. Kurchatov began to develop a control and safety system for nuclear reactors. The system was designed, installed and deployed in under a year. It was used in the world's first nuclear power plant in Obninsk, and later it was also installed in the first nuclear icebreaker.

The icebreaker was controlled automatically directly from the control room. This room maintained the necessary operating conditions for the heart of the icebreaker: the reactors. They had a capacity of 32.4 MW, or approximately 44,000 metric horsepower.

Thanks to nuclear energy, the huge icebreaker, which was 134 m in length and had a displacement of 16,000 tons, was able to cut through ice that was up to 2.5 m thick.

The new icebreaker was innovative for its time, and not just in the technical sense. It was also comfortable and not altogether devoid of luxurious amenities.

It was named a marvel of industrial design. The cabins accommodated one to two people, and its interior was finished with Karelian birch and Caucasian walnut. The ship had a sauna, music room with grand piano, library, movie theater, and smoking room. The Lenin was not just the flagship of the fleet, but was intended to represent the whole country. 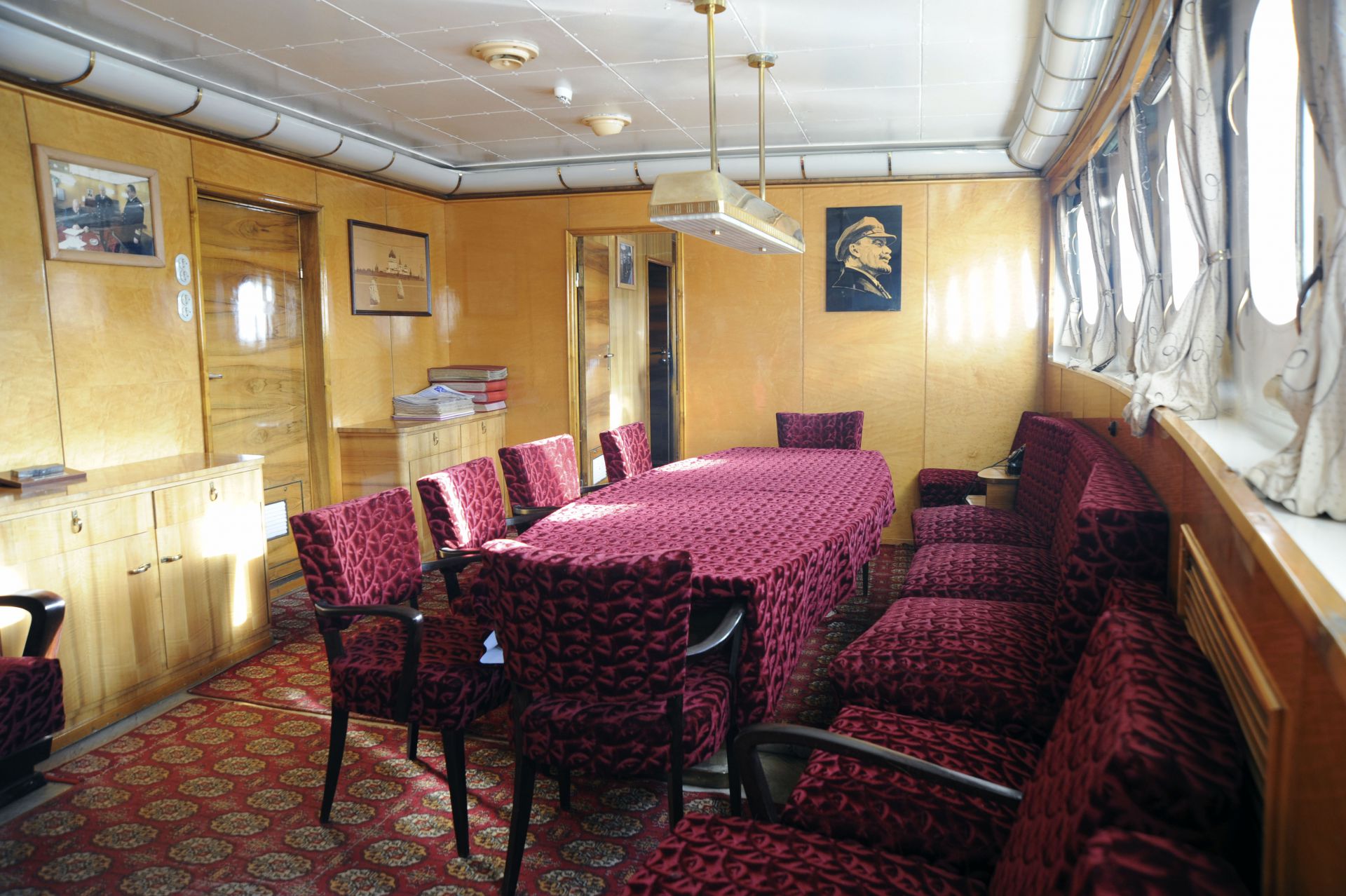 Breaking through the ice of the cold war

The Soviet Union was able to get ahead of the whole world during the first decade after the devastating war: In 1954 the country established the world's first nuclear power plant in Obninsk, and in 1955 it completed the first flight of the Tu-104, which was the only passenger jet in the world at that time. The flight of Yury Gagarin represented the pinnacle of Soviet achievements.

The Lenin nuclear icebreaker, which was developed in this era of technological competition, was able to connect places that probably could not be reached by other modes of transport. It was not only a powerful ideological project, but it was also economically effective.

It is believed that it was thanks to the Lenin that the expression atoms of peace gained currency. The icebreaker was built in the midst of the Cold War during the race for technological superiority. However, it was developed for entirely peaceful purposes.

During his historic visit to the United States Nikita Khrushchev announced: "Our nuclear icebreaker Lenin will not only break through the ice of oceans, but also the ice of the Cold War."

Foreign delegations even visited the icebreaker during its construction and testing. It welcomed the following on board: Cuban leader Fidel Castro, British Prime Minister Harold Macmillan, and then U.S. Vice President Richard Nixon.

In the logbook you can see the autographs of Yuri Gagarin and Alexandra Pakhmutova. On the icebreaker's grand piano she performed for the first time Ustavshaya podlodka ["Tired Submarine"], which later became a hit.

Laid up for the evening

The next Soviet nuclear icebreaker was only built in 1975. This was the Arktika, which became the first surface ship in the world to reach the North Pole.

The legendary Lenin has been granted a second life. The world's first nuclear-powered ship was decommissioned in 1989. It has been fully secured and placed into permanent dry dock at the Murmansk marine station.

Five years ago a museum opened on board the famous icebreaker. More than 150,000 visitors have visited the museum since its founding. But, interestingly, the ship is still listed as being in operational reserve should hostilities break out. According to experienced sailors, if the Lenin's fuel tanks were loaded with fuel, then it would be able to operate again without incident.