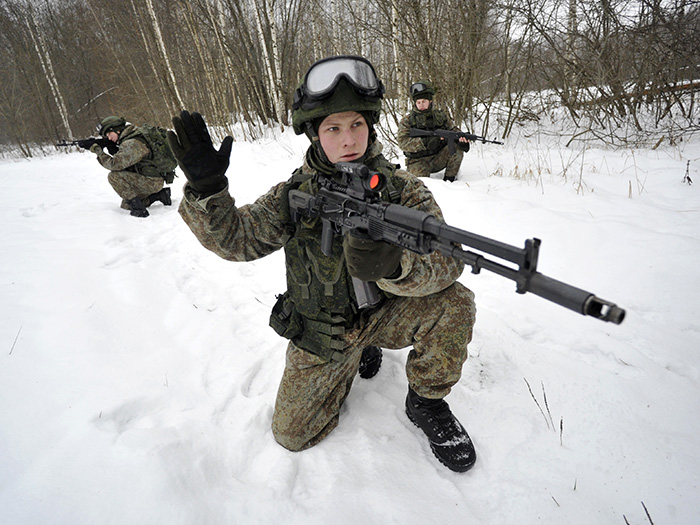 A Russian ‘Ratnik’ (‘warrior’) combat uniform is in the final stages of testing. The next-generation equipment is fitted with special sensors that are designed to transmit information to military medics about a soldier’s physical state.

Over the next two years the St. Petersburg Military Medical Academy will work on a system which will monitor soldiers’ vital functions, determine the physical state of the wounded and assess the severity of their injuries. A health monitoring system has been developed by the Central Research Institute of Precision Engineering, part of the state corporation Rostec. It is expected to be included in the upgraded model of the ‘Ratnik’ combat uniform.

Specially designed sensors will continually record heart rate, respiratory rate, blood-oxygen saturation indicators and microvascular blood filling. The system will store and analyse this data and any deviation from the norm will trigger an alarm in the medical service. The new technology draws on the already-developed Streletz (Sagittarius) system of intelligence, control and communication of medical data. All information is automatically saved on a flash drive that stores medical history.

Soldiers in medical units will have access to information about the condition of the wounded and their GPS coordinates. Based on the severity of the injuries, the state of a wounded soldier will be assessed on a scale of 0 to 5. This will help prioritize evacuation of the wounded and identify the best way of reaching them.

The ‘Ratnik’ combat uniform also includes body armour, GLONASS-GPS navigation, the Streletz (Sagittarius) control system, a transmitter, and an automatic weapon with night and thermal vision. The helmet is designed to withstand a shot from a pistol at a distance of 10m and has a thermal camera and video sniping equipment. The ‘Ratnik’ uniform also includes food, water filters, medical supplies, a tent and a sleeping bag and weighs up to 20kg in total. It was first introduced in 2011 and is expected to be formally adopted in the summer of 2014. This year’s state defence order includes the supply of tens of thousands of sets of the combat equipment for ground, airborne, and naval troops.

The ‘Ratnik’ combat uniform is produced at the Central Research Institute of Precision Engineering, which was founded in 1944 and is now part of Rostec. The enterprise focuses on development and manufacturing of small arms and ammunition, military equipment, artillery systems, optoelectronic devices, sporting and hunting ammunition, sealed containers for transportation and storage, and firearm simulators.