The T-50 Fighter will feature even greater stealth capabilities 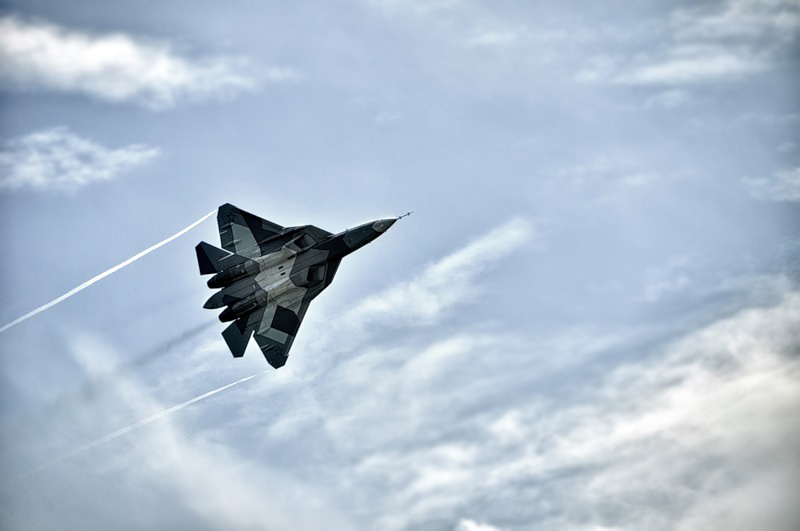 The fifth-generation T-50 (PAK FA) fighter jet is equipped a number of technologies produced by Rostec companies that make the plane even less visible to the enemy radar. This design solution moves the T-50 ahead of all aircraft in its class, including the American F-22.

The aircraft company Sukhoi managed to greatly reduce the effective surface scattering of the PAK FA, which is the basic element for visibility on aircraft radars. The average value of this indicator for the T-50 fighter is between 0.1 and 1 square meter.

In order to achieve this level of stealth, designers moved all weapons to the inside of the plane and also changed the shape of the air intake channel, also lining its walls with a material that absorbs radio waves.

Thanks to these new design solutions, the T-50 is now ahead of not only all other fighters of the Russian Army, but also foreign models. For example, the visibility of the American fifth-generation F-22 fighter is 0.3-0.4 square meters, according to PAK FA chief designer Alexander Davidenko.

Rostec enterprises produced the main parts of the T-50. The company Radioelectronic Technologies created the avionics and other radio-electronic needs for the fifth-generation aircraft. RT-Khimkompozit made the canopy and paneling. The T-50 is the first Russian combat aircraft made from a high proportion of composite materials, making up 25% of the mass of the aircraft and covering 70% of its surface.

The United Engine Corporation is designing the propulsion system for the fighter jet. The work for the fifth-generation engine is taking place at the company “Engines for Combat Aircraft.” The T-50 prototype is already testing the first-phase AL-41F1 engines, a turbofan engine with afterburner and thrust vector control. With this engine the aircraft is capable of supersonic speeds without afterburner effects.

Aviation Equipment, another Rostec holding, developed a unique aviation system for the T-50, including a new power supply system that is two times more powerful than any of its Russian peers.

Ka-62 to be adapted for export

Production of the Q-400 aircraft has been approved for Ulyanovsk

The T-50 Fighter will feature even greater stealth capabilities

Rostec to enter the regional aircraft market with Bombardier