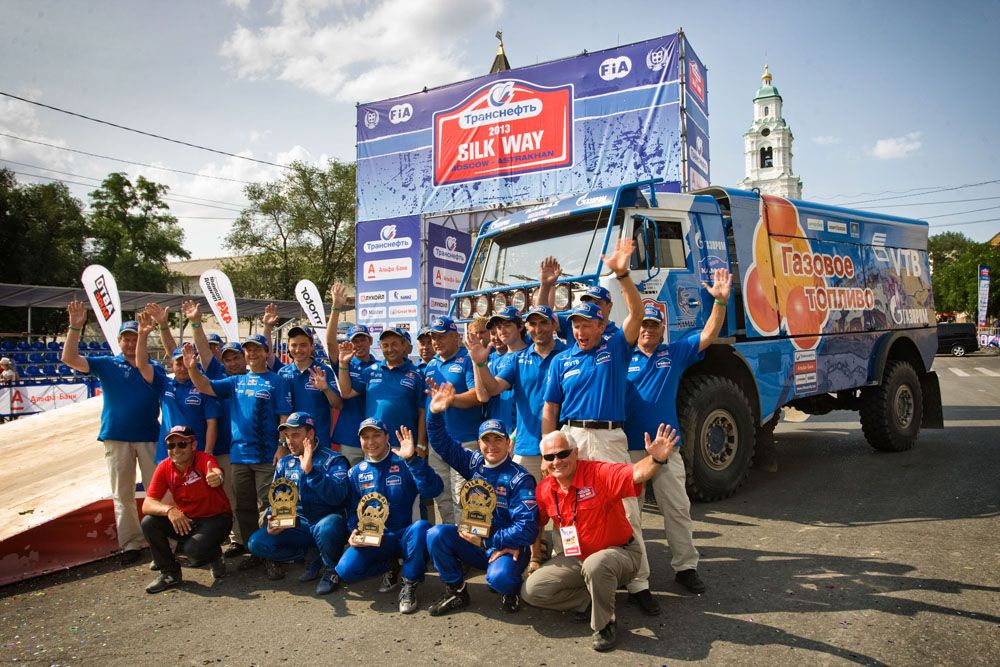 The winning crew came in second in the final stage of the race, behind Anton Shibalov’s crew, also from the KAMAZ Master Team, which took second place overall.

The race was full of surprises: the previous day, the victory crown was worn by Ayrat Mardeev’s crew, the winners of last year’s Silk Way. However, after carrying out engine repairs, his crew missed a checkpoint and earned penalty points, putting them in fourth place, while the truck driven by Dmitry Sotnikov went into first place. According to the young rally driver, at the start of the race, he had not counted on winning.

“The important thing for us was to make it to the finish line in good time and without breaking down. This is my second Silk Way rally and I expected that the whole crew would find it a tough experience. It still hasn’t sunk in that we’ve won. There’s only one thing we want to do now – just take it easy.”

About halfway through, Eduard Nikolaev’s crew, another leader from the KAMAZ Master Team, lost all chances of making it to the podium, and finished in 18th place.

That Dmitry Sotnikov’s crew won was also a surprise for Vladimir Chagin, the team leader. “Before the race, we made the vehicle lighter and it now carries far fewer spare parts than in former driver Ilgizar Mardeev’s time.

“This was done for one reason – to allow the truck crew to stay as close as possible to the cars in the race. And here’s the result: Dmitry Sotnikov’s crew came in ahead of the rest.”

The final stage of the rally took place near Astrakhan and was the shortest with 162km, including a 87km special stage. The route covered all types of ground: gravel tracks, sand dunes and wild steppe. As almost all the rally participants said, this was a rigorous stage demanding full concentration and effort.

The Silk Way is an ideal way to put military vehicles through serious trials. The race conditions are tough and varied enough to test vehicles in field conditions, as well as to prepare the crew for the next Dakar rally.

KAMAZ is the largest manufacturer of trucks in Russia. It comprises over 150 organizations, including 12 large automobile plants, in Russia, the CIS and other countries. The company has assembly lines in Vietnam, Iran, India, Kazakhstan and Pakistan and employs over 59,000 people.

KAMAZ has shown a new Typhoon

Daimler may acquire a 40% stake in KAMAZ