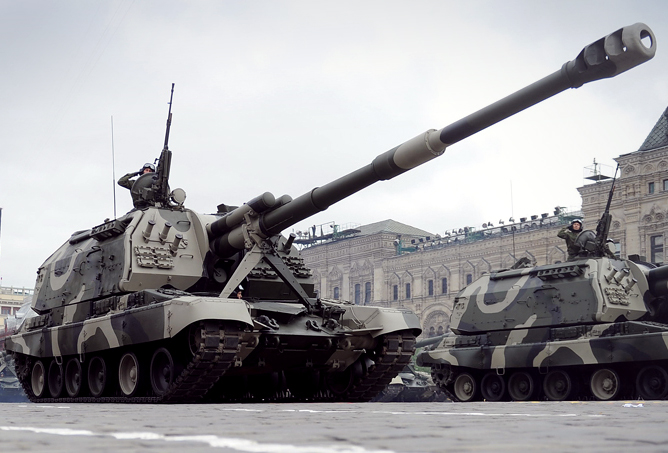 Russian Rosobornexport and  Indian L&T are in a straight contest to supply the 100 self-propelled tracked howitzers to the Army and the trials of the two guns are slated to begin in June-July time-frame this year.

An Indian private company is for the first time in direct competition with a foreign vendor to supply 100 self-propelled howitzers to the Indian Army in a deal expected to be worth over Rs 2,000 crore.

The guns are being procured by the Army as part of its more than Rs 20,000-crore artillery modernisation programme.

Not a single new artillery gun has been inducted ever since the infamous Bofors contract for 410 field howitzers became a political issue in 1986.

The gun being offered by the Indian firm is learnt to have been built and developed in collaboration with South Korean Samsung Techwin and is based on its "K9 Thunder" self- propelled howitzer.

Under the contract between the two firms, the Korean firm will provide key technologies to L&T for local production of the howitzer.

After the trial phase gets over by early next year following the winter evaluation of the guns, the Army will find out the lowest bidder and include the chosen guns in five regiments of its artillery units.

As for the Russian party, Rosoboronexport's offer is not specified yet. However, it is quite possible that it would cover one of the Msta self-propelled artillery weapon variants.

ROSOBORONEXPORT, a Rostec subsidiary, is the only Russian state company exporting full range of products, services and technologies of military and dual purposes. Rosoboronexport is a leader of international arms market. The company performs 80% of Russian weaponry and military equipment exports. Rosoboronexport cooperates with over 700 ventures and organisations of Russian MIC. Russian military-industrial complex geography has over 70 countries.

Source: The Times of India