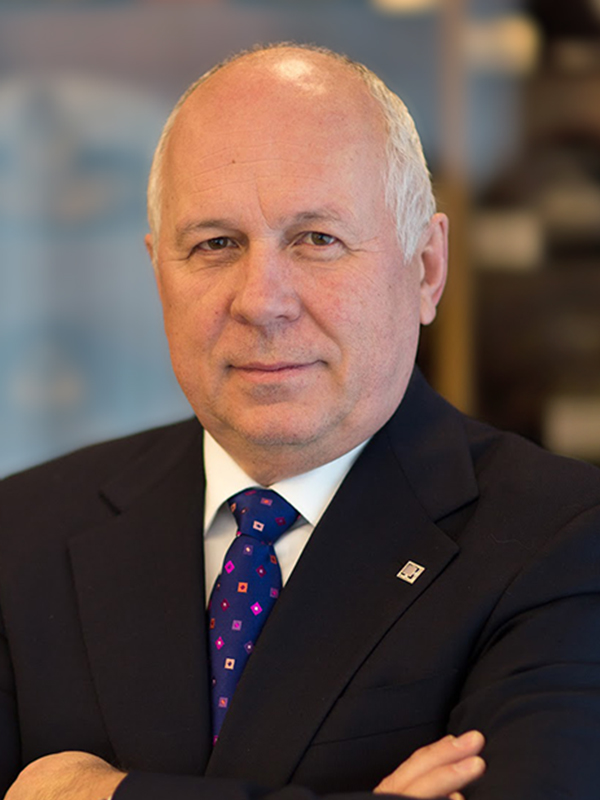 In 1975, Chemezov graduated with honors from the Irkutsk Institute of National Economics. He also completed the Higher Courses of the Military Academy of the General Staff of the Russian Armed Forces.

Sergey Chemezov is a Board Chairman of several large Russian organisations:

He is a member of the Board of Directors of:

He is a member of the Supervisory Board of:

He is also a member of the Bureau of the High Council of the Edinaya Russia (Russian Political Party).

The head of Rostec is a member of the commission for military-cum- technical cooperation of the Russian Federation with foreign states within the framework of which he actively promotes the idea of preserving and strengthening Russia’s position as one of the largest players in the global military products market.

Sergey Chemezov is a member of the Academy of Military Sciences, a Doctor of Economics, and a professor, having written more than 130 publications. As the head of Rostec Corporation, he greatly values the training of young professionals. Currently, Rostec cooperates with 214 universities. In addition, Chemezov devotes special attention to the revival of research and development work. On his initiative, the corporation recruited the legendary scientist Y. N. Koptev, who now serves as the chairman of the Scientific and Technical Council.

The Rostec CEO is the head of the Military & Technical Cooperation and High Technology Department of the Moscow State Institute of International Relations of the Ministry of Foreign Affairs, a member of the Higher Attestation Commission of the Russian Federation Ministry for Education and Science.

Chemezov serves as a member of: the Board of Trustees of Lomonosov Moscow State University; MGIMO University, part of the Russian Ministry of Foreign Affairs; the Higher School of Management at St. Petersburg State University; National Intellectual Development, the fund that supports the scientific and design work of students, graduate students, and young scholars; the Russian Hockey Federation; the Russian Geographical Society; and the charitable Fund for the Deaf and Blind.

Sergey Chemezov is a member of the Board of Trustees of the Public Diplomacy Fund named for A. M. Gorchakov, the Russian Cycling Federation, the nonprofit Center for Problem Analysis and State Management Design, and the Charitable Fund for the Restoration of the New Jerusalem Monastery and Cathedral of Christ the Savior. Member of the Supervisory Board of the All-Church Graduate and Doctorate Program named for Saints Cyril and Methodius. Since 2014, Chemezov has served a member of the Russian Council of School Olympiads.

The CEO of Rostec Corporation has received the Russian State Prize for Science and Technology in 2004 and the Suvorov Academy of Military Sciences Prize. He has been named as an Honorary Doctor of Plekhanov Russian Economic University and St. Petersburg State Polytechnic University.

He has awards from the Russian Orthodox Church, including the Order of St. Sergius I degree, Order of the Holy Prince Daniel of Moscow III degree, and Order of the Blessed Saint Grand Prince Dmitry Donskoy II degree.

In March 2010, Chemezov was awarded the French Legion of Honor for his significant contribution to Russian-French cooperation in high-tech production.

In 2010, Chemezov was awarded the Order of Merit of the Italian Republic with the degree of Commander for his successful expansion of partnerships with large Italian corporations.

Married, with three sons and a daughter.