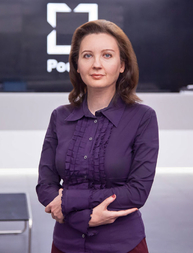 In 1994, she graduated from the Finances and Credit Faculty of the Russian Distance-Learning Institute of Finance and Economics with an economist degree.

In 2000, she was awarded a general audit certificate of the Ministry of Finance of the Russian Federation.

Since 2011 till present – a member of the Institute of Internal Auditors.

She has more than 7 years of experience in the Big Four accounting firms (Deloitte & Touche, PwC); in 2005-2007 she held a post of financial director of the Troika Dialog investment group.

She has been working at the Corporation since 2008.