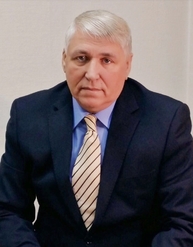 Born on 21 November 1950 in the town of Nikolaevsk, Volgograd Region.

In 1977, he graduated from the Moscow State University (Faculty of Law).

1977 – 1986 – service at the Public Prosecutor's Office, Senior Councillor of Justice

Since 2008 till present – chief compliance inspector of the Rostec State Corporation.